Hellfire on a dimmer switch 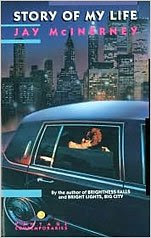 It turns out that the woman with whom John Edwards had an affair, Rielle Hunter, provided the inspiration for my Alison Poole the narrator of my favorite Jay McInerney novel “Story of My Life”. A flightly actress/model/whatever, Alison spends her time hopping from club to bedroom to shower, in ardent pursuit of Mr Wrong:

It seems like his idea of wild is argyle socks. But it’s O.K., I like straight guys, I’d never go out with anybody who’s as irresponsible as me. Most of the guys I know have really high-powered jobs and make up for lost time when they’re not in the office. The Berserk After Work Club. I seem to attract them in a big way, all these boys in Paul Stuart suits with six-figure salaries and hellfire on a dimmer switch in their eyes.

Hellfire on a dimmer switch in their eyes? Hunter's tastes may have calmed down a little at least acccording to McInerney himself, who ated her back in the late eighties. "When I met her, she was bubbly and fresh and honest. She was afraid of nothing," McInerney told the NY Daily News. "She was doing a lot of drugs at the time - but so was I and everyone else. It really surprises me. She's not attracted to conventional guys - and Edwards, with his haircut and all, is a conventional guy."