Georgia on his mind 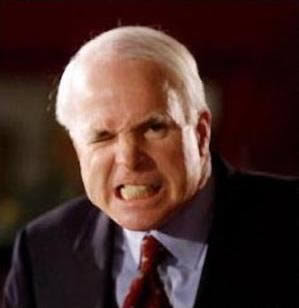 Somebody spare us the sight the cable news trying to "rate" the candidates' statements on Georgia — who has "won", who sounded "tougher" more "presidential" and so on. First off, America can do nothing in this conflict. Only the Europeans can. So not even Bush's words carry much weight. But the words of the candidates to be his successor? McCain appears the only one to have bought into the whole exercise. He's making the kind of growling noises facilitated only by the complete absence of all consequence — a barking dog, safe on its leash. It's amazing to me that the very people who cast aspersions on Obama's command of the English language — its divorce from action, reality, etc — happily eat up this kind of stuff.

Putin would die laughing if he read this week's American newspapers. The president, George Bush, declared the Russian invasion of Georgia "disproportionate and unacceptable". This is taken as a put-down to the vice-president, Dick Cheney, who declared the invasion "will not go unanswered", apparently something quite different. Bush says that great powers should not go about "toppling governments in the 21st century", as if he had never done such a thing. Cheney says that the invasion has "damaged Russia's standing in the world", as if Cheney gave a damn. The lobby for sanctions against Russia is reduced to threatening to boycott the winter Olympics. Big deal." — Simon Jenkins, The Gaurdian