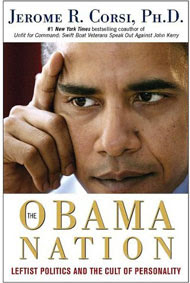 List of the things Jerome Corsi gets wrong in his book The Obama Nation:

The facts of his father's divorce, his mother's maiden name, his college drug use, the existence of his sister, his job straight out of college, the dates of his attendance of United Trinity church, his positions on the global poverty act, nuclear weapons and abortion. He fabricates: a false childhood friendship with a muslim, an allegation that Tony Rezko found Obama his house, a contribution to a "socialist" magazine, a false pledge to reduce the size of the military and de-escalate troops in Afghanistan.

Apart from that he's totally on the money. That "PhD" is especially touching: Corsi is the man behind Unfit for Command, the book that launched the swiftboat attacks on John Kerry. He believes that President Bush is trying to merge the United states with Canada and that airplanes were not to blame for the towers’ collapse on 9/11 and that Hillary Clinton is a lesbian.