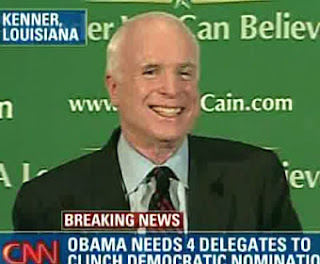 "...Less asinine was McCain's two-pronged lie that Obama would rather lose a war than a campaign and that he snubbed injured troops in Germany. The former is repulsive and you can tell McCain knows it because he has a weird habit of saying it and then grinning broadly and humming a little to himself as a semi-laugh. He doesn't own the statement even as he says it." — Andrew Sullivan

Which makes me wonder: is that grin a lie tic? I'm going to watch him over the next few weeks and see. I've noticed he does it to rubber-stamp strong statements which he expect to go down well with the GOP faithful. (He did it a lot when he first launched his attacks on Obama in front of the green screen). It's the expression of a cheeky boy who knows what he is saying is naughty and fully expects to be aprehended at any moment. There's something of the sheepish rascal to McCain: try it on until told otherwise, and then recant fully, saying 'its a fair cop.' Also, the expression of someone who is being forced to be meaner than he wants to be.