The election in one word: 'Enough!' 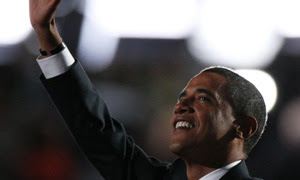 So he finally showed why he is so lethal. He sits and he waits and he listens to what you have to throw at him, and then, when he's sized you up, seen your best shots, and he's sure that you've exhausted yourself, he puts you on the floor: Enough.
That speech gave me species pride. If aliens landed tomorrow and said, so what have you got, what can you humans do, I would point to Barack Obama's acceptance speech for the democratic party nomination and say "there. That's what we can do. What have you got?"
God knows how the Republicans come back from that. What do you say? How do you clear your throat, put up your hand, and seek to formulate some kind of reply? Its hard to pick a fight with such eminently reasonable positions without looking cramped and peevish. Obama didn't just do his own positions proud, he did his opponents own positions better than they do. He came up with everything they might possibly say about him and then pre-rebutted it. It made you wonder why on earth they had the idiocy to raise it in the first place.

Weak on national security? "You don't defeat a terrorist network that operates in eighty countries by occupying Iraq" — the last word on the matter. "John McCain likes to say that he'll follow bin Laden to the Gates of Hell – but he won't even go to the cave where he lives" — a year's worth of schoolboy boasting cut down to size. "If John McCain wants to have a debate about who has the toughness and temperament to be commander in chief, that is a debate I am willing to have." It is one they no longer need to have.

Perhaps the most devastating line was this: "I don't believe that Senator McCain doesn't care what's going on in the lives of Americans. I just think he doesn't know". Its one thing to demolish your opponent, but to do so while extending so charitable an interpretation of their motives is in another league altogether. Ditto the wonderful, Sorkinesque passage at the end neatly filleting three hot button issues — abortion, gun control and gay rights.

We may not agree on abortion, but surely we can agree on reducing the number of unwanted pregnancies in this country. The reality of gun ownership may be different for hunters in rural Ohio than for those plagued by gang-violence in Cleveland, but don't tell me we can't uphold the Second Amendment while keeping AK-47s out of the hands of criminals. I know there are differences on same-sex marriage, but surely we can agree that our gay and lesbian brothers and sisters deserve to visit the person they love in the hospital and to live lives free of discrimination.

He made reason look so easy. And he keeps getting better. Tonight, he looked awfully close to being unbeatable.