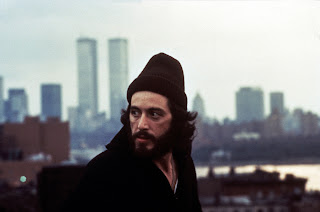 There's an absolutely fascinating interview with Frank Serpico in the New York Times today. Now 73, he lives in Columbia county in upstate New York, about two hours north of New York City, where he lives a monastic life in a one-room cabin which he built himself in the woods near the Hudson River. Still bearded, handsome and flamboyantly dressed, like "some sort of fur trapper", he is is known to the locals as Paco, his off-duty nickname in the Village in the late 1960s. He eats mostly vegetarian and organic food, cooking on the wood-burning stove that heats the cabin, where there is neither television nor the Internet. He relies on Chinese medicine, herbs and shiatsu. He practices meditation, the Japanese Zen flute and African drumming, and dance: ballroom, tango, swing. He takes long walks at sunrise and rescues wounded animals.

True to his cinematic self, he always showed up in a different outfit and hat: one day as the sheepherder, the next day the prospector, then the monk. He wears an earring in each ear and a magnifying glass around his neck for fine print. He would spout esoterica and draw from his knowledge of Italian, Spanish, German, Dutch, Arabic and Russian. In a coffee shop, he might quote from Dante’s “Inferno,” or pull out his harmonica and play “Danny Boy.” Mr. Serpico said he had played, in local productions, the Arab in Saroyan’s “The Time of Your Life,” Gonzalo in “The Tempest,” a detective in “Ten Little Indians” and Johann Most in Howard Zinn’s “Emma.”

I'm so pleased to hear all this. It was so clear from the movie Serpico that there were two interesting stories going on: one about police corruption and the other to do with the singular individual who exposed it, not because he wanted to grand-stand, or out of any unyielding sense of morality but simply because he didn't want to accept a bribe himself. Think about that. He didn't mind other people taking bribes, he didn't care what you or I did, he simply didn't want to take one himself. I find that fascinating, that that desire — to keep clean only the three foot patch of ground on which he stood — should have snowballed, solely by dint of other peoples reactions to him, into the biggest police corruption case in New York's history. It's the reason Pacino's performance remains, to this day, one of the only entirely sanctimony-free portraits of goodness in modern cinema. Serpico didn't want to bring down the system. He wanted to be left alone. They wouldn't leave him alone. Ergo, he brought down the system.

Not all is peace and serenity in the woods, however. He still carries bullet fragments lodged just below his brain; he is deaf in his left ear, and has nerve damage in his left leg. Moreover,

Mr. Serpico still brims with bitterness that he was made third-grade detective, rather than the top tier of first-grade... Michael Bosak, a 27-year veteran of the Police Department who has served as its informal historian since retiring in 1995, said that for a time he kept in touch with Mr. Serpico by e-mail, and that his messages tended to be long diatribes on various topics, seemingly unaffected by the passage of decades. “The N.Y.P.D. is a thousand times more honest than it was 40 years ago,” Mr. Bosak said. “I think he’s still in a lot of pain. Going through what he went through, it can drive you off your rocker.”