The 2010 Golden Globe Awards: almost as much fun as an earthquake 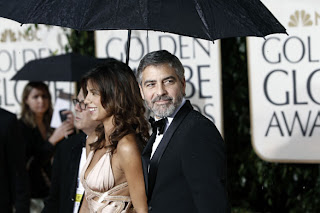 The best moment of the evening came early: Monique's powerhouse of an acceptance speech, almost as draining as watching her movie. It was pretty much downhill from there. Winning for Grey Gardens, Drew Barrymore self-deprecated so much she seemed on the point of evaporating altogether and turning into a fine mist. Ricky Gervais veered, queasily, between the mischevious and the mean-spirited. Even Tom Hanks told a dud of a joke about Alec Baldwin that had him clawing back the audience's favour. When Hanks flubs it, you know an evening is in trouble. Baldwin, meanwhile, had the smartest idea and stayed away to help the people of Haiti, the cause du jour. Clooney looked positively envious: even humanitarian catastrophe seemed preferable to an evening spent listening to James Cameron deliver updates on the state of his bladder. Twice he mentioned the illustrious organ: once, upon winning 'Best Director', to tell us it was full, and again, upon winning 'Best Drama' to inform us that he had successfully voided it. Was he expecting applause? On the plus side, Michael Giacchino won best score for his beautiful waltzes in Up — a victory I thought unlikely after the battering everyone's eardrums received from James Horner's caterwauling Avatar score. Giacchino's win provided the evening's biggest aesthetic thrill, easily. Second best was the Scorsese montage. I don't know whether it's his editing rhythms, or hustling camera movements, but man, that guy's films look good spliced together like that. I felt so razzed watching it, I had to get up and pace around my living room quaffing orange juice until I calmed down again. Christoph Waltz gave an elegant, literary speech, nicely spun around the theme of globes and globalism — nice! — with a great description of Inglorious Basterds as Tarantino's "Big Bang" of a movie; I saw Tarantino nod at that, the wordsmith in him approving. Well said, sir, well said! I can't really remember what Meryl Streep said in her speech: she must be stuck for material, having given so many of these things. Jeff Bridges was lovely. He doesn't just reel off names: he singles each person out, makes eye contact, gives props, bigs them up in front of the whole audience. "Get a shot of her," he said, directing the cameraman towards his wife. Every woman watching swooned at that moment. Sandra Bullock — can't remember. Most fascinating were the two Cameron speeches: the moment he opened his mouth, all the breathable atmosphere seemed to be sucked from the room as surely as it was from the fictional moon of Pandora, whose noxious atmosphere will put you down in one minute and stop your heart in four. People really hate the guy, huh? Cameron knew it, too, and seemed intent on correcting any impression we may have that he is a fabulous self-important asshole, primarily by the canny trick of inviting everyone else in the room to be fabulous self-important assholes along with him. “We have the best job in the world, we really do," he said. " I just want you to give it up for yourself. What we do is, we make entertainment for a global audience, and that’s what the Golden Globes mean." Announcing another win for the blue people, Julia Roberts looked like she was having a hard time keeping down her dinner.