Countdown to the Golden Globes 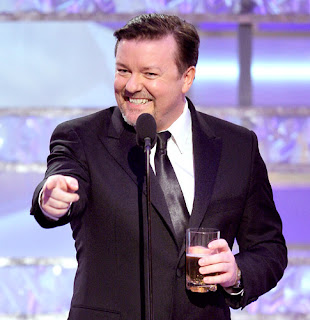 So the Golden Globes are tonight and my wife and I are chomping at the bit to beat one another into a fine pulp. I have a slight advantage over Kate with the Globes, which are awards by the Foreign Press Association, and I am, or used to be, a member of the foreign press. She's better at the Oscars, because she has a native's radar for where the love is — who's been plugging away, who's due, etc etc. But we've both learned a lot from the other so neither win by that much: it's always a vote here, a vote there. And my votes are still entirely not locked down. Waltz and Monique for supporting, obviously. Meryl Streep for best comic actress. Best original song: The Weary Kind. Score: James Horner. Foreign film: The Prophet. Animated Feature: Up. Best screenplay: Up in the Air. Best comedy/musical: 500 Days of Summer. After that things get a bit murkier, starting with best comic actor: Damon, Day Lewis or Downey? Best actor: Bridges or Clooney? Best actress: Mulligan or Bullock? As for best film/director, does it go Avatar/Bigelow or Hurt Locker/Cameron? I've got four hours to figure it out. Kate is beetling about the apartment with great sense of purpose. I don't like it. I don't like it one bit.