The Best of Leo Di Caprio: Catch Me If You Can 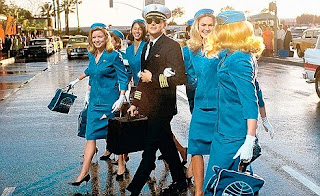 We can all agree: Titanic was not the snuggest fit for Di Caprio. I still like him in it, I think he brings much needed bouyancy to a thundersome movie, but fair enough: he wants edgier stuff than "I'm jus a tumble weed, blowin' in the wind." But almost every movie he's made with Scorsese, on the other hand, has been a dud: Gangs of New York, The Aviator, The Departed. It's an uneasy marriage — Scorsese gets his projects bankrolled, Di Caprio gets artistic cred — but there's too much reverence in the partnership, not enough friction. The only thing letting Di Caprio down as an actor is his voice: no matter how much he beefs up it remains boyish. He should never shout. The one film that gets him exactly right in my opinion — which is to say which draws on the exact mixture of star power and acting chops he brings to the table — is Catch Me If You Can, Spielberg's most purely enjoyable movie since Raiders of the Lost Ark. Much of its vigor, its bouyancy, is down to di Caprio. Blood Diamond is the same: a stirring old-fashioned film of the kind Bogart used to make, which brought out both the matinee idol and the actor.