Best Films of the 1940s: Notorious 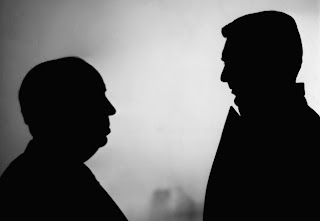 From a long-list that includes:— Citizen Kane, The Lady From Shanghai, Key Largo, My Favorite Wife, The Treasure of the Sierra Madre, The Big Sleep, It's A Wonderful Life, Adam's Rib, Great Expectations, Oliver Twist, Double Indemnity, Bambi, Now Voyager, Dumbo, To Have and Have Not, Double Indemnity, The Grapes of Wrath, Sullivan's Travels, Les Enfants du Paradis, Pinocchio, The Grapes of Wrath, Arsenic and Old Lace, Kind Hearts and Coronets, Brief Encounter, My Darling Clementine, Out of the Past, On The Town, The Bicycle Thief, Shadow of a Doubt, Unfaithfully Yours

A confession: I've never liked Citizen Kane. I've admired it. It's transcendent, technically dazzling, shaped by an artistic temperament that was greater than, or too much for, the movies. That may be connected to why I don't like it. The Welles pictures I like are Lady from Shanghai, A Touch of Evil — up and down crime pics, technically innovative but not turning themselves inside out with immortal longings. They feel like flesh and blood. Kane feels like a mausoleum. It's the same across the board for me. Sure, Sgt Pepper is the "masterpiece" but Revolver is the better album. Vertigo is the "masterpiece" but Notorious is the better film. It seems like the height of perversity to take a filmmaker who excels at certain things — narative, suspence, jokes — and then praise him for the one picture that contains none of these things: I suspect that the people who rate Vertigo don't much like Hitchcock, deep down. Notorious does everything, excellently. Its Hitch's sultriest picture, with Grant at his most untrustworthy and Bergman at her most white-throated and vulnerable, and a spy plot that at times feels like a projection of their feelings, markers of their emotions: if they ever fell out of love, the whole film would simply disappear. The racetrack. Claude Rains. His mansion. His mother. The wine bottles. The CIA. Even the projector through which the film was being threaded — everything would just melt away like mist.