The Best of Gary Oldman: The Contender 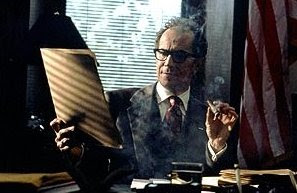 Oldman's agent once told me that Gary was very unhappy about the way The Contender turned out. The way he saw it, his character Sheldon Runyon, the Republican congressman trying to destroy Joan Allen, was the hero of the movie — he was annoyed it had been slanted, and received, the other way. That told me more about screening acting than I have managed to learn from a thousand other sources. For of course Runyon is the hero of the piece, according to the funhouse mirror inside his head, and of course no man could do the vile things he does without believing himself waging a virtuous war. (The Contender was the high-water mark of almost all the actors involved, from Bridges to Allen to Oldman and Slater). Apart from that it's surprisingly thin pickings in terms of decent movies. Gary Oldman isn't just the best actor never to have received an Oscar, he's also content to have appeared in some truly crappy movies, like a crocodile hidden in mud. He's got a touch of Brando's contempt for the medium. Of his early punk trio — Sid and Nancy, Prick Up Your Ears, Meantime — only Meantime stands up as anything other than a record of a meteoric performance. But he was perfect as the shadowless Lee Harvey Oswald in Oliver's Stone's JFK, and his conception of the role of Dracula was frighteningly weird (hair curlers?), more frightening than anything in the movie.