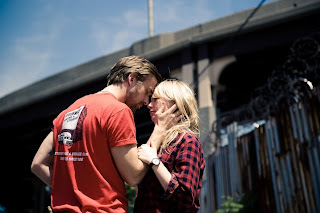 '[Winter's Bone] Debra Granik’s blend of low-budget regional realism and crime thriller is an absolute knockout, for me the narrative film of the festival so far. Young Jennifer Lawrence is sensational as Ree, fierce teenage scion of an Ozark family of bootleggers, outlaws and meth-cookers' — Salon

'The advance word from Sundance on “Blue Valentine”—a romantic drama by Derek Cianfrance in which a couple on the rocks (played by Ryan Gosling and Michelle Williams) revisit their relationship in flashbacks—has been very favorable.' — The New Yorker

'Overwhelmingly sad, honest, creepy and ultimately hopeful, Catfish is easily the most buzzed-about documentary of the Sundance Film Festival so far... Catfish is a must-see for the Friend-Me-Now generation, as well as a striking portrait of a modern-day online relationship' — Cinematical

'Earlier tonight I caught the midnight world premiere of Rodrigo Cortés' Buried, the stuck-in-a-coffin film starring Ryan Reynolds. In short, it was phenomenal... I already knew it was set entirely inside a coffin where Reynolds is stuck and buried, but the big question is if they could actually pull off a 90 minute film set entirely in a coffin. They did. They not only pulled it off, but it's an amazing film.' — First Showing
'Guided by pitch-perfect performances from Tommy Lee Jones, Chris Cooper, along with one of Ben Affleck's finer roles, The Company Men is a sobering journey into how unsafe all of our jobs really are. It doesn't particularly tell a happy story, but that's the "nature of business," as they say.' — Film.com

'Given the red-hot politics of the gay marriage issue, her timing is arguably perfect, and at any rate the movie is worth the wait. Cholodenko gets memorable performances from Annette Bening and Julianne Moore as the flawed, self-involved but profoundly human partners in a long-running relationship that’s hitting one of those slippery, middle-age danger zones' — Salon

'Cyrus becomes a dark, poignant, sometimes hilarious war dance as [John C Reilly, Marisa Tomei, and Jonah Hill] walk the line between creepy and sympathetic. Each member of this awkward triangle teeters somewhere between bare honesty and furtive manipulation as he or she lets loose all manner of dysfunctionality.' — Carpetbagger

'A little while ago I emerged from Taika Waititi's Boy, which is now, I've decided, the other strong-recommend film I've seen so far at Sundance 2010Waititi has a little bit of Wes Anderson in him. The movie is as freshly felt and stylistically alive as Bottle Rocket and Rushmore did in the mid to late '90s' — Jeffrey Wells

'Intelligent and highly respectful of its central character and his titular landmark poem, "HOWL" is an admirable if fundamentally academic exploration of the origins, impact, meaning and legacy of Allen Ginsberg's signal work. It is also an intriguing hybrid of documentary, narrative and animated filmmaking' — Variety