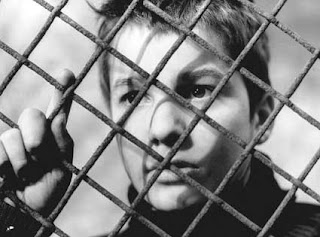 Compiling my recent Best-Of-the-Decade lists — for the 1930s, 1940s, 1950s, 1960s, 1970s, 1980s, 1990s, and 2000s — I was struck by the number of debut films I'd included. Scorsese's Mean Streets, Truffaut's The 400 Blows, Godard's Breathless, Charles Laughton's Night of the Hunter, Terence Mallick's Badlands, Peter Bogdonavich's Last Picture Show, Quentin Tarantino's Reservoir Dogs, Wes Anderson's Rushmore... To which others might add: Welles's Citizen Kane, Chaplin's The Kid, Luis Buñuel's Un chien andalou, John Cassavetes' Shadows, John Huston's The Maltese Falcon, Jacques Demy's Lola, Steven Soderbergh's sex, lies, and videotape and Eric Zonca's The Dreamlife of Angels. Zonca is, of course, in his mid-fifties but all these examples tend to support a long held-suspicion of mine that not only do debut films have a dewy glow all their own, but also: directing films is essentially a young man's game. Not all the time of course, but it's a rare filmmaker who's later work beats the stuff he did first out of the gate. I think in particular of Scorsese whose pictures have gotten technically better and better, at the expense of any overriding reason for their existence. Casino feels like weightier, more overwrought Goodfellas, and Goodfellas, for all its dazzle, feels like a hippo compared to the light-footed sprezzatura of Mean Streets. Mallick never made anything as perfect as Badlands. Truffaut's early work was his best. All these filmmakers have one more thing in common: they are all regularly exalted as the highest of cinematic artists, directors for whom the medium of film was as paintbrush and palette to a painter: a faithful registrar of their most delicate exhalations and featherlight changes of mood. It is the artisans and entertainers who often achieve true longevity in the movies — Spielberg, Hawks, Huston, Hitchcock — a fact that is often taken by the Sight & Sound brigade as evidence of their cash-registrar souls. A man like Welles was "better" than the business in which he found himself and that is why he was cut down so ruthlessly. Coppola is more of a genius for having gone bankrupt. There is no question that to sustain a long career in the movies requires a special kind of resilience — leathery, stubborn, rhino-like — but I've often wondered whether its the films that get worse or the audience that get bored of the filmmakers tricks. As far as David Lynch is concerned, maybe Wild at Heart felt as fresh to him as Blue Velvet. It was just from the outside that it felt a little like self-parody, one for the fans, playing to the gallery, just like Pulp Fiction a few years later, and The Royal Tenenbaums a few years after that. Those three filmmakers couldn't be more different and yet if you slice them chronologically, they all tell the same story. Blue Velvet is to Wild At Heart as Reservoir Dogs is to Pulp Fiction as Rushmore is to The Royal Tenenbaums. The first film has the self-announcing assurance of a young man with nothing to declare but his talent; the second showing him beginning to preen in the mirror. I wonder, too, if films don't offer so close an illusion of lifelikeness, that we are drawn to the same virtues and vices which we, as human beings, are biologically predisposed to identify ine life itself: the vibrancy of youth, the shiver of old age, etc. When describing any decent-sized film career I often find yourself reaching for biological metaphors: after the insouciance of youth, the oeuvre acquires weight, solidity, thematic mass, but also self-consciousness, the awareness that comes from having fans and critics point out to you what your "trademarks" are. You may react against this, struggle. There will be the temptation for a quick revivifying affair with low-budget filmmaking. It will not last. You will eventually return to centre, coast atrophy, feel the beginnings of middle-aged spread. Before finally: forgetfulness, repetition, lifetime achievement awards, butt sag.