The best of Stanley Kubrick: The Shining 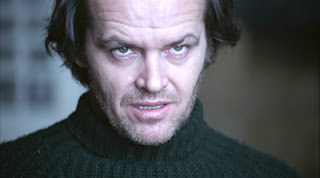 1. The Shining
2. Lolita
3. Dr Strangelove
4. Paths of Glory
5. A Clockwork Orange
6. The Killing
7. Spartacus
8. 2001: A Space Sdyysey
9. Barry Lyndon
10. Eyes Wide Shut
As you can see, I don't like Kubrick. (People that like Kubrick put 2001 first). He scares me. Which is why I like The Shining, because it is a film about what the horror of waking up one day to find yourself turning into Stanley Kubrick. I also think it's the best movie ever made about alcoholism, and falling off the wagon, improving on King's novel (which I rate) with that brilliant white-out in the maze. I saw Lolita on the TV again the other day and was surprised by how funny it is. Dr Strangelove is vicious fun. The rest I'm pretty indifferent about, except that I think he got worse as he went along, more abstract, more cerebral, almost as if he were purging himself of everyday human concerns, or turning into that monolith at the start of 2001. Bah humbug.