The best of John Carpenter: Halloween 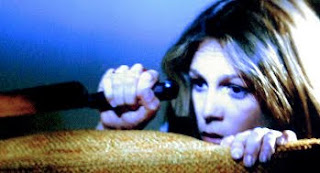 1. Halloween
2. Assault on Precinct 13
3. The Thing
4. Escape from New York
5. The Fog
6. Christine
When I think of Halloween I think of those large semidetached surbuban houses, set way back form the street, with those huge lawns, big enough that you run out of street light before you run out of lawn. Inside one of those houses, Jamie Lee Curtis is fighting tooth and nail for her life but you wouldn't be able to tell it from the outside: all is calm. The same with the police precinct headquarters in Assault: from the outside, everything looks fine. You can't even see the gang and only that tiny, pht-pht noise of the silencers and the tinkle of the glass tells you that the windows are being shot out. That's why Carpenter is our most ardent Hitchcockian, much more so that Brian De Palma, because his nightmares unfurl in the safest places of all — what could be safer than a police station? — undetected for that very reason. Who would suspect a murderer in broad daylight at the UN? Who would think to bury a dead body on a bright fall day?