"We are spending ourselves into oblivion" 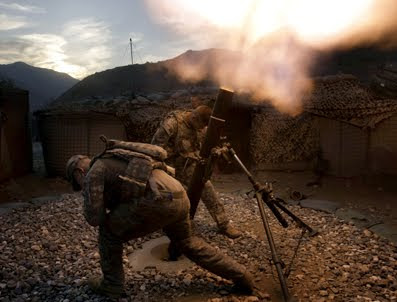 "I find specious the reasons we ask for bloodshed and sacrifice from our young men and women in Afghanistan. If honest, our stated strategy of securing Afghanistan and al-Qaeda resurgence or regrouping would require us to additionally invade and occupy western Pakistan, Somalia, Sudan, Yemen, etc. Our presence in Afghanistan has only increased destabilization and insurgency in Pakistan where we rightly fear a toppled or weakened government may lose control of its nuclear weapons. However, again, to follow the logic of our stated goals, we should garrison Pakistan not Afghanistan. More so, the September 11th attacks, as well as the London and Madrid bombings, were primarily planned and organised in Western Europe, a point that highlights the threat is not one tied to traditional geographic of political boundaries... We are spending ourselves into oblivion." — from the resignation letter of Senior Civilian Representative, Marine Captain Mathew P. Hoh

This is the way Empires always end, with horrified onlookers unable to do anything to stop it. Each event seems inevitable at the time, each choice a 'slam dunk,' to use George Tenet's phrase, and yet in totality progressing inevitably to ruin. The political interests in continuing the war are simply too great to resist, even though it has weak public support, costs $65 billion to maintain a force of 68,000 troops, with each additional 1,000 U.S. soldiers in Afghanistan costing about $1 billion a year. The machine cannot be stopped.

"The decline of Rome was the natural and inevitable effect of immoderate greatness. Prosperity ripened the principle of decay; the cause of the destruction multiplied with the extent of conquest; and, as soon as time or accident and removed the artificial supports, the stupendous fabric yielded to the pressure of its own weight. The story of the ruin is simple and obvious: and instead of inquiring why the Roman Empire was destroyed we should rather be surprised that it has subsisted for so long." — Gibbon, Decline and Fall of the Roman Empire, 2nd ed., vol. 4