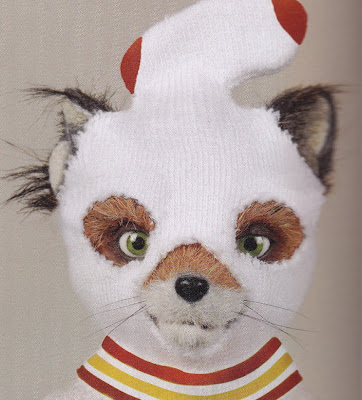 To Union Square, and a Saturday night showing of the Fantastic Mr Fox! No arguments with the ticket people over my coffee this time, straight in, great seats, loved the movie from beginning to end. I won't try and describe it, suffice to say that I left the theatre marvelling yet again over the intimate peculiarity of Wes Anderson's tone, which is quite unlike anything else on earth. If someone from the future had tracked us down in the mid-nineties, rolled down the window of their de Lorean and said, "Psst... Hey, kids... Okay so there's going to be this filmmaker, a few years from now. He's all about the Rolling Stones and The Kinks and Ziggie Stardust, but he's in his thirties. Kind of Salingeresque but he also does this really neat Roald Dahl adaptation. Loves corduroy. Martin Scorsese thinks he's wonderful. So will everyone you know under 40." Your response would probably have been, "Really? The Rolling Stones and... corduroy? Martin Scorsese and Roald Dahl? I'm not really seeing this guy for some reason. Run that past me again..." Here's something else I've noticed about the audience of Anderson's movies: everyone laughs at completely different things. Kate and I saw the film with my friend Scott and his two daughters Boat (13) and Cocoa (11). We sat in one long line, like the family in the movie. Scott would laugh at something and I'd go "Hey, Scott found that funny." Then Kate would chuckle and I'd go "there goes Kate." And then Cocoa or Boat or I would let loose a guffaw. But it was all at completely different stuff. When we came out of the movie afterwards none of our memories connected. We all had different favorite bits. It made for an odd conversation on the way home. But we still all liked the movie.

Oscar chances: I have this to score an upset over Up for Best Animated Feature, for two reasons: 1) the Academy is aching to give Anderson something, but so far hasn't been able to find a way to do so. 2) They don't want the Best Animated Feature Oscar to turn into the Annual Pixar Award. There's nothing wrong with Up, but someone has to go under the bus.