Precious: the Susan Boyle of the Oscars 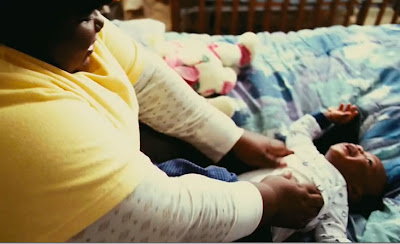 "Expelled for being pregnant, Precious seeks alternative schooling at Each One Teach One, a local program for those undesired elsewhere. Her classmates, especially Jo Ann (Xosha Roquemore), whose favorite color is “fluorescent beige,” and Rhonda (Chyna Layne), with her fabulously broad Jamaican accent, are the most naturally uplifting people in the film—far more so than their teacher, Blu Rain (Paula Patton), whose powers of uplift feel like make-believe. She is a vision of tolerant gentleness, who wears a new set of soft fabrics every day and plays Scrabble in the evening with her equally lovely lesbian partner. “They talk like TV stations I don’t watch,” Precious says, but that tart line is not borne out by the film, which drinks in Ms. Rain without demur. The same goes for the fantasy sequences—hugely ill-advised dream clips, showing a richly clad Precious at a movie première or slow-dancing with a hunk." —Anthony Lane The New Yorker

Travelling back from a screening of the film with my friend Darrell this guy overheard us talking about Precious on the subway and took issue with us. "Maybe it's your background," he said finally as to why we weren't really getting it. "Maybe it's just too raw for you." It's a dumb argument — imagine him saying we didn't "get" a film about the super-rich because of our lowly background — but that certainly seems to be the shape of the hype swirling around the movie: can you handle it? Imagine everyone's delight, then, when they finally sit down to watch the unwatchable and find — hey it's got jokes and fantasy sequences and wish fulfulment figures and so on. My review here. That's why I think it could win Best Film: it's got the exact same mixture of grit and glitter of last year's winner, Slumdog Millionaire. Like that film, it tells a movie-industry allegory of sorts: it tells the story of those caught in the degradations of extreme poverty who dream of becoming entertainment stars. This, needless to say, is a message that the good people of Hollywood like very much. They like being so eagerly petitioned and they like even more the glow of self-conscious benevolence that comes when they grant the underdogs their wishes. Let them eat cake. That's why Precious could win. Not because of its grittiness / rawness / etc but the exact opposite. She's the Academy's answer to Susan Boyle.