The politics of poop jokes 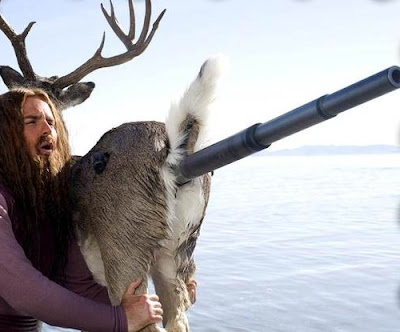 The New Yorker takes issues with the New York Times over it's dim view of all the poop jokes in Jared Hess’s Gentlemen Broncos. The Times reviewer asked

how many evacuations a comedy can deliver before they ruin the joke. The spray of vomit that inspired this question had just shot out of the mouth of the hapless teenager at the center of the new movie, an emission preceded or followed by (I lost track) a geyser of snake feces and some nonreptilian, if equally repellent, defecation.

entering the realm of the filmmaker, trying to make sense of the experience that went into the creation of the work and the experience that the work reflects. Others prefer to use criticism as a kind of taste test, a consumer guide—and in this case, the question of evacuations would naturally predominate, and count against the movie.

Entering into the spirit of the evacuations thusly, the film's true intentions stand revealed.

Hess’s wondrously ingenuous filming of Benjamin’s visions are both as sublime and as crudely carnal as scripture itself. The grotesque bodily functions, human, animal, and alien, that the movie depicts unflinchingly—as well as the “unpleasant, unattractive characters” Dargis says the film is filled with—are the point. It’s easy to present the beautiful people and the scrubbed world as divine creations; Hess’s vision sacralizes what other filmmakers don’t.