Running on a different clock 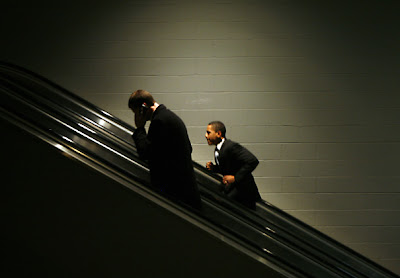 "[Obama] reminds me of a chess grandmaster who has played his opening in six simultaneous games. But he hasn't completed a single game and I'd like to see him finish one," - Henry Kissinger.

That is exactly what his presidency feels like at the moment. He appears to be working on a different time scale to everyone else, batting away the 24-hour news cycle as a mere irritant. Every time he does it, I hold my breath, wondering if it's going to work this time, or whether everyone's impatience is going to make him cave, but then all the noise and clamor dies down, and by the time everyone else has moved on to something else, he makes his move. It's like he's playing chess and everyone else is playing musical chairs. Even Kissinger sounds impatient. Of the six simultaneous games Obama has started, I'm certain some he will lose, but by comparison with the previous president, who was barely ever one move ahead, if that, he is fascinating to watch.