The day the madness came knocking 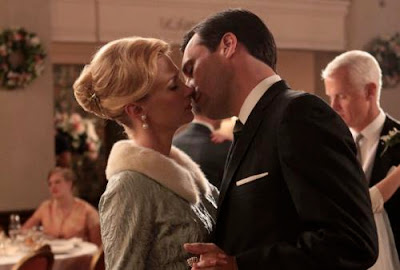 I liked what Barbet Schroder did with the lighting in last night's episode of Mad Men, "The Grown-Ups", with lots of blue shadows and crespuscular magentas and purples: very bruised-looking, the whole thing, but then it was the episode in which the American Dream received its biggest single blow to the solar plexus. It was time to keep our appointment at the book depository building on Dealy Plaza on November 22nd. I've been scared for this episode from the moment the series began. The writers haven't proven very adept, so far, at making their historical background lie flat: the election, the civil rights stuff, even the cuban missile crisis, they all felt a little stuck on, the price tag just removed — historical throw cushions too-artfully arranged. At least with the Kennedy assassination, you have no choice: the background muscles into the foreground, although it does mean that for long session you were staring at the TV watching characters staring at the TV. Very meta. I loved all the unanswered phones ringing. Sometimes the flickering black-and-white footage was too interesting, particularly the slo-mo of Oswald's shooting.: I felt like telling the characters to shut up when they started talking. Betsy's shriek: "what is going on?" brought home to me how much Oswald's death was like the second plane on 9/11: the thing that really told you history was buckling and warping right before your very eyes. And I liked Peter's decision to curl up with his wife watching the news: the assassination was perfect soul food for his corporate blues. I wanted to curl up with them. Not so sure about Don and Betsy's exchanges for most of the episode, which seemed bizarrely unaffected by last week's nuclear detonation. "I thought you'd left," she says. "I'm here," he replies. I know they're summa cum laude graduates of the John Cheever school of marital alienation but my wife and I spent most of it going "has she forgotten?" Then she told Don she didn't love him and we breathed again. "I don't love you. I kissed you yesterday. I didn't feel a thing... You can't even hear me right now. "You're right," he goes, and walks away. (He did a lot of walking away in this episode. Don Draper walking out on conversations is a bit like Larry Hagman's putting the phone down on people in Dallas.) Schroeder framed their comings and goings the way he did the ice ballet of the Von Bulows in Reversal of Fortune, and Don's body language when alone was just perfect: slumped, hands clasped, head tilted forward, as if someone had just yanked his batteries out.