Disillusion, disenchantment and disappointment for kids 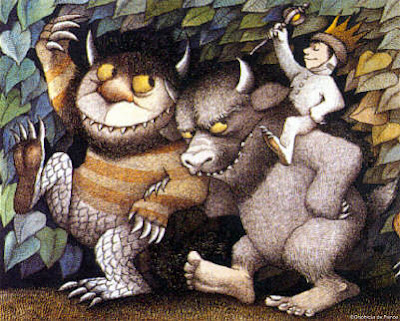 "The furry, talking creatures who give the movie its name are strikingly grouchy, quarrelsome and passive-aggressive. They whine, they pout, they manipulate, they break things and hurt one another for no good reason. One of them makes a big deal about her cool new friends, who turn out to be a pair of terrified owls. Others use self-deprecation as a way to feel special, or deploy aggression to mask insecurity. They act, in short, just like people and turn to Max, a human child in a wolf suit who proclaims himself a king, to deliver them from their humanity. The love between ruler and subjects is mutual, but so is the disillusionment that rounds off Max’s sojourn on the island and sends him back across the sea to his mother. No place is free of conflict and bad feeling, and no person has the power to make problems disappear. Where there is happiness — friendship, adventure, affection, security — there is also, inevitably, disappointment. That’s life." — A O Scott NYT

I agree in principle. We do spent too much time worying about what kids will watch or enjoy. I watched Who's Afraid of Virginia Woolf when I was 10: it remains one of the most vivid movie going experiences of my life. Kids can take a lot. But Scott's argument — that Jonze's film bravely refuses to mask the air of sulllen disappointment that marks adult human relationships — presupposes that Where The Wild Things Are is a good movie about sullen, disappointed human relationships. I don't think it is. I think it gets a huge kick out of letting those bruised emotions into a kids movie, but mistakes the frisson of that joke for a movie plot. Disillusion isn't just one of the accidents of the story: its the whole point of the story. That's not telling the truth; its just sourness.