He's really not going away is he? 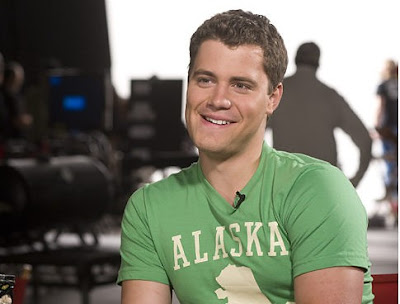 'Levi Johnston flew blindfolded into a perfect—and perfectly contemporary—storm. He found himself at the center of a swirling mess: an inexplicable Republican misstep, the Christian right, an unstoppable presidential campaign, Facebook, the bewildering pervasiveness of modern media. If there are any other Alaskan teenagers who have somehow managed to invoke that sorry lot after an evening (or two) of careless lovemaking, I can’t think of them. A nut ad and a song are the least he deserves for his troubles.'— Nick Hornby

It's hard not to love Levi Johnston. It's bad enough that's he's engaged in a battle over visitation rights with Bristol. It's incandescently embarassing that's he's leaking all this terrible info about Palin to the media. But on top of that, as Palin relaunches her political brand with her new book, Levi's being photographed scratching his balls for Playgirl magazine. The whole thing has a baboonish poetic justice to it. He really is not going away, is he?