It's such a delight to have her back 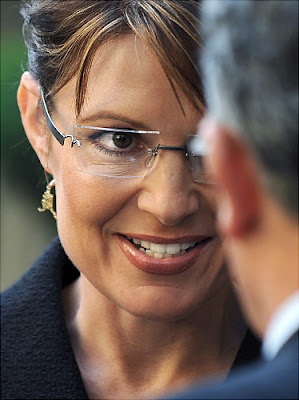 'Palin blamed a culture of political correctness and other decisions that "prevented -- I'm going to say it -- profiling" of someone with Hasan's extremist ideology. "I say, profile away," Palin said. “Because I use the word profile, I’m going to get clobbered tomorrow morning. The liberals, their heads are just going to be spinning.'" — Sarah Palin on The Sean Hannity Show

As a card-carrying Obama-supporting ACLU-joining liberal I would like nothing more than to oblige. It pains me greatly, therefore, to report that I am unable to disagree with her comment on the grounds that I cannot actually understand it. If someone says to me "the parrots are retrograde with conjunctivitis, do you agree?" I might reply that I find it hard to say whether I agree or not because I cannot call up a mental picture of what parrots retrograde with conjunctivitus might involve. The same goes for Palin's suggestion that we "profile" an individual. Profiling is the process by which you winnow a large number of suspects down to one. If you start out with one person, there's no need to profile anyone. You have your suspect. It's like a film director saying "I'd like to put out a casting call for Robert Pattinson." If Robert Pattinson is the actor you want, you don't need a casting call.

Like many of her pronouncements, this one has a Tourettic, Koan-like mystery that no amount of examination can dispel. It exists in a land beyond mere agreement or disagreement. Do I disagree with her? Its hard to say. It might turn out that I agree with her. Does she mean we should have picked up more on the warning signs? In which case: how sensible. But what has that got to do with profiling? Unless she's just shoving it in there, randomly, because she knows it gets some people riled, just as a liberal railing against civil rights infringements might shove in the word "abortion" just for the hell of it. No reason, just because it foxes people when he does. It's not an argument, its voodoo, magic dust, smoke and mirrors. Booyaakasha!