Wolcott on Mad Men: the passion and the pathos 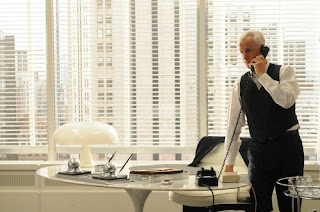 'What makes Mad Men a great series is that so much of its mystique is predicated on the myth of Don Draper’s creative genius and what this season has shown better than the previous three is that his genius is not a myth, not a hollow bag of tricks, but a demonstrable force that derives from digging deeper into his thought processes than anyone else, so deep he barely seems to be thinking but is submerged in the problem before him like Simenon’s Inspector Maigret entering an almost self-induced coma to disengage from the noise of the moment and emerge with his mind no longer a muddle, the nature of the crime clarified.... Don has pride but he doesn’t have a speck of false pride; he perceives what needs to be done and what the opposition isn’t anticipating better than anybody (even Pete, the most forward-looking of the others) because his mind is always trained farther downfield, zeroing in on the target, blurring out everything in between like a Zen archer.... But the tartest line belongs to Roger, who, embarking on carrying out the agency’s economy measures, gripes, “Well, I gotta go learn a lot of people’s names before I fire them.” '

Approaching James Wolcott's monumental live-blogging of this season's Mad Man I feel much was Boswell did before Johnson's descriptions of London, or Clive James' descriptions of Arnold Schwarznegger's musculature: what more is there to add? Only this: that the new offices have so turned Roger Sterling into his own work of Op Art that I want him always stationary, like Rodin's thinker, so I can better bedazzle my eyeballs and watch him blend into the background like a chameleon; that Christina Hendricks Joanie is the loneliest character on TV, a portrait of a woman marooned in her flesh whose plaintiveness no biopic of Russell or Mansfield or Monroe could ever hope to match; also, last night's episode featured a lot of very welcome location shooting; the lighting has gotten a lot better this season; John Hamm looks even better in profile than he does head-on; they should use more incidental music; and Dr Faye Miller's Horse Whisperer ways are going to be sorely missed.