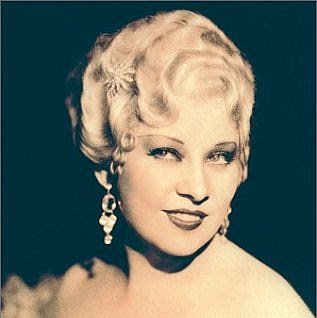 "Mae West’s reputation will never be the same again. There we were, thinking her as the goddess of gyrating libidinousness, snacking on men like peanuts, and all the while her truly shocking secret lay simpering in the back of her bedroom. Make your way passed the alabaster nudes and sepia prints of Mae in better days; step over the polar bear shagpile rug, and into the salmon-pink inner sanctum of her boudoir, and what would you find? Mae hard at work over a typewriter. This was “Mae Wests great secret,” writes Simon Louvish, in his splendid new biography, “ that she went home to her apartment or hotelroom at night and wrote”. Come up and see her sometime and you would come across nothing more x-rated than Mae polishing her adverbs.

In all, she wrote 12 plays, and 3 novels, not to mention the 20,000-plus bon mots in her joke-book, honed assiduously over four decades, and which she sprinkled over every movie she was in, like confetti. Give a part in a movie to Mae West and you also had to find supporting roles for Mae West’s one-liners, crisp with sex-war sagacity: “ a hard man is good to find,” “ it isn’t the men in my life it’s the life in my men,” and so on. Hollywood’s first sex symbol — or “sex personality” as the Boston Herald quaintly put it — caused riots wherever she went. In Hartford, in 1938, ‘Mae West Safe’ driving week was disrupted when 30,000 fans flooded the streets, although it was really in the bedroom that called for De Millean skills of crowd-control. Louvish keeps track of Mae’s conquests like a man racing mice: an accordionist, a xylophone player, a Frenchman named Dinjo with with whom she coupled 26 times in one night: “the results were like a high speed film, blurred but exciting”. None of these men, he notes, were permitted to stay the night. Only her pet monkey Boogie got to share West’s breakfast table, and despite one short-lived marriage she died childless, having put sex to every possible purpose except the one for which it was intended.

The closest West came to procreation was, it seems, the medical text-book she pored over with a friend, aged 7, when growing up in Brooklyn: “I had a funny feeling about my parents,” she remembered. “A peculiar feeling — disgust you might say. It took me a long time to get over it. They suddenly weren’ t gods anymore.” A long time, indeed. That Godlike tumble from grace is one she would replay again and again in her career, flushing society’s dirty little secret out into the open, and using sex as the great leveller. “I’m going to dig under your supposed respectability and show you who you are” says a docklands prostitute to a society dame in West’s play Sex (1925), with which she kickstarted her career. The play was shut down for indecency, and landed West in the slammer for 8 days, the first of her energetic bouts of fisticuffs with the guardians of of American decency. “I enjoyed the courtroom as any other stage,” she quipped.

Her first film, She Done Him Wrong, had the Hays office crawling all over it; they cut 100 feet of film out of the song A Man Who Takes his Time — a considerable blow to the man’s prowess, one would have thought — and hacked away at most of West’s lines, but the result was to concentrate her oozing licentiousness even more: denied its obvious berths, it simply took up residence in the body language between her and Cary Grant, in the languid glances and pauses of their conversation, and in such seemingly innocuous phrases as “Why doncha come up and see me” “Do you get me?” and “You can be had”. These days, of course, the true purpose of the Hays office is known to all. At the time, they saw it as their God-given duty to keep America’s morals intact and save the nation from mortal sin. Now, its is clear that their real function was to provide comic relief for Hollywood biographies in the many decades to come. One of their best gags here involves a series of ever-more earnest communiqués over the song Pom Tiddley Om Pom, in Belle of the Nineties, whose acceptability “will depend almost entirely upon the manner in which he song is sung and the action accompanying the music”. In a sense, they were quite right: they could hack away at the one-liners all they wanted, but the most suggestive thing about West was the way she moved: undulating across the screen like she was being poured into the room, or sashaying back and forth when she was supposed to be standing still, like an idling motor.

“In order to play this shady character and keep the sympathy of the audience there’s one thing I must have — dignity”, said West. Louvish’s biography allows her to keep that dignity at all times, even when she seems most in danger of losing it. There is certainly room for a horror when contemplating West’s later career, which was as tawdry as it gets: an appearance opposite Ed the Talking Horse, a movie with Ringo Starr, an inevitable Vegas Comeback Tour, featuring gyrating “athletes” in lion cloths and hosted by Liberace. But Louvish ploughs through it all, refusing the temptations of camp-critical reclamation, but rather paying tribute to the sheer steam-ship momentum of this woman. You have to hand it to someone who can step from a limo wearing a diamond-studded dress, two lavender orchids on her lapel, draped in “a white cape of close-clipped fur, as if an albino o calf had made the ultimate sacrifice.” West was turning up for a court deposition."

— reprinted from my review in the Sunday Times, 2008