Why I am a poor judge of movies that predate me

I just got back from an entirely delightful mid-afternoon coffee with the Siren (caught by the accursed paparazzi in the above shot), who expressed some curiosity as to why I believe that I can only accurately judge movies made while I have been alive — why my annual round up of favorite movies stops with the year of my birth. I have often wondered a little guiltily why this might be the case, particularly when I was a working film critic, a job for which there is skimpy enough qualification as it is, without the one area of expertise everybody does acknowledge being removed. Why is it that I can recognise Billy Wilder's The Apartment as a much better film than Jack Ass 3-D or Borat, but find only the latter capable of eliciting a belly laugh? Or why it is that I can see Jacques Torneur's Cat People for the masterpiece that it is, but would be lying if I said I found it more frightening than, say, Paranormal Activity? And I didn't even like Paranormal Activity. Could it be that some people are simply more bound by the myopia of their particular historical moment than others and I just happen to be one of those blind, mole-like sods, grubbing around in the top soil? It would explain a lot. I would like to think that underpinning this myopia, at least by way of compensation for it, is a respect for the embedded, day-by-day grain of the present and a corresponding respect for the effort of historical empathy required to escape it. I am genuinely curious what it would be like to wander into a movie theatre at the end of a hard week, and buy a ticket for the new Cary Grant movie, and for that movie to turn out to be His Girl Friday. I can tell you what it feels like to watch it on TCM for the tenth time, at a distance of 80 years, and to know some of the dialogue so well as to be able to recite whole portions in my head, but there is no escaping the retrospective hue of my love for the film, or the irrevocability with which I am denied the casual, first-come-first-served intimacy of someone who has just walked off the street. I will never know what it feels like to watch Cary Grant movies casually, or indifferently, the way I watch Jim Carrey movies, just as Humbert Humbert will never know what it is like to be one of the jocks at Lolita's school, beloved by her for their very diffidence. Others are not so hidebound — the Siren is certainly one of them. I'm merely the monkey drawing the bars of my cage. There may be a British aversion to anything that smacks of heritage at work, here. Maybe I spent too much time translating Anglo-Saxon poems about errant Nordic warrriors in college, thus instilling in me a rocketlike aversion for anything that reeks of study, or the academy, or any sustained effort to find puns or word-play funny, together with a moth-like attraction to the hard gemlike flame of the eternal present that so entrances Hollywood. I don't mean to get all Nietzschean. It's just the surest sign I can think of in an art-form is still alive and not losing sensation in its extremities — it's complete and utter disregard for anything that happened before last Tuesday. I find I have some sympathy for the amnesiac excitability of Los Angeles. I am not as appalled by remakes as some. I find myself switching off when Martin Scorsese starts talking about degraded film stock. My face feels stiff with not laughing when I watch a Marx brothers movie. And I like the Marx brothers, can see their place in film history, find it fascinating that they have lasted so long, and not others, etc, etc. They just don't make me laugh. And while this is not everything, they are comedies, so it's something worth reporting, at least, if only because it happens to be true. It certainly doesn't stop me envying the Siren her easy fluency with the past, or her ability to illuminate it in prose as surefooted, skinny-dipping prose.*
* The Siren has posted a response that includes a graph, if you will. 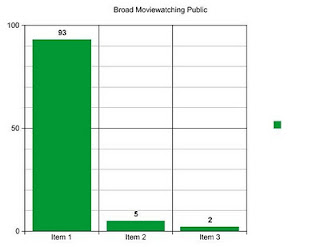 Item 2. Percentage of People Who Feel Casual Intimacy With a Movie That's 100 Times Better But Is Older Than They Are

Item 3. Percentage of People Who Feel Casual Intimacy With Anything That Was Shot Before 1960 and/or Has Bette Davis

I'm impressed. I've never received so scientific a response. Still less in 24 hours. The Siren suggests that she was struck with the speediness of my posting. Hers suggests she is aided by a small team of elves armed with slide rules. I was going to respond with something to the effect that of the two world views hers is obviously the more attractive, that if I had a choice in the matter I would rather belong to a discriminating minority of Bette Davis fans, and if given total free reign would like to demarcate, within the Bette Davis tent, the even smaller minority of Bette Davis fans who also happen to love Keats. But the fact is, we live in the best of all possible worlds. I am happy that I am the way I am and that the Siren is as she is. Just as it is the critics job to panhandle movies released just yesterday for future classics, the Siren writes about classics as if they were just released yesterday. She pays the past the highest compliment, which is to remember that it was once the present.