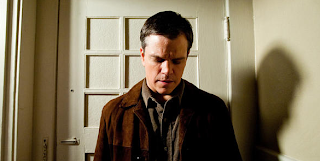 In Clint Eastwood's drippy Hereafter, Matt Damon plays a retired psychic named George who only has to brush up against somebody and — boom — he is visited by visions of the afterlife. This appears to resemble every other vision of the afterlife you've ever seen on film, which is to say, like the business' traveller's suite at Heathrow airport after you've accidentally doubled up on contact lenses. Fearful of his gift, George spends most of his time fending people off, living one of those solitary, spinsterish lives people are always living in Eastwood films: supper for one to the wistful accompaniment of a one-fingered pianist, before retiring to bed, where George lies, both arms beneath the sheets, listening to Derek Jacobi reading Little Dorrit. He appears to be preparing himself for mummification. One day a British kid looks George up and asks him to put him touch with his recently deceased twin brother. That's what would happen in a normal film, anyway. In this one, it takes the plot exactly 90 minutes for the kid to get to George. That's how solitary he is. "It's not a gift, it's a curse," he insists. "Sometimes it's better not to know everything about a person." It sounds like a personal and aesthetic mission statement from Eastwood himself, who has always modelled his social graces on those of St Simeon of Stylites, although seeing as the person George is addressing is Bryce Dallas Howard, an actress for whom the Twilight series is less a job of work and more a permanent existential state, it is less oafish than it sounds. Giving off the million-dollar gleam of a woman from whom a whole army of personal stylists have sprung just seconds before the cameras rolled, she bears down on Damon during an evening cookery class, giggling incessantly and gazing on with the hunger of a woman who would suck his soul out through his eyes. Damon — no slouch himself in reticence stakes — unsurprisingly seizes up, petrified, as if suddenly struck with the thought that Eastwood plans a remake of Play Misty for Me. Actually, Eastwood has other fish to fry, namely that British urchin and a French TV journalist who survives a tsunami in the opening reel — by the far the film's most dramatic moment, not just because of the obligatory cgi wave, but because Eastwood sticks around for the aftermath, a terrifying maelstrom of roof-high rivers and tumbling cars. Its downhill from here on, as if the movie were the one recovering from a near-death experience. Peter Morgan's script, which touches down on such disparate worlds as French TV journalism, British social services and American internet psychics, seems like the work of a highly intelligent humanoid who conducted 30 minutes of research in each area* — there's barely a line with rings true, or which Eastwood doesn't swaddle in acres of silence. I haven't felt so strong an urge to shake a film awake since the woozy hey-day of Sydney Pollack. If the movie were any slower, it would play as the new David Lynch flick, with the scene set in the Swiss alps as the dream sequence. That's where the French TV journalist goes to research a book on her near-death experience, a book she later publishes with the title "Hereafter: A Conspiracy of Silence", although given that her publishers were expecting a biography of Francois Mitterand, I don't think she was dealt with too harshly. She later hooks up with Matt Damon, although this, too, takes an eternity to happen. The whole film is like one enormously elongated first act, during which everyone sort of mosies about, getting into position; then something happens and the whole thing is over. I just felt sorry for Damon, who seems to be playing almost twice his age, doing through the dusty, melancholic motions, occupying the space normally occupied by Clint himself; as for that ghastly v-necked woollen jerkin he is forced to wear throughout the whole movie, it conjured a vision of eternal damnation all its own — perhaps only a snuggie could have been crueller. The only ones enjoying themselves are the ghosts who instruct their nearest and dearest not to grieve too much, since it's okay really being dead, what with all the weightlessness, omniscience, and other unforseen perks. That's it. That's the message of this movie. Quit with the weeping. It's not so bad being dead. And if you want to write about the after-life, don't promise your publisher a biography of Francois Miterrand. I knew that already. D+

An explanation for this hiccup in the career of Morgan comes courtesy today's New York Times:—

A couple of months later [Morgan] was further bewildered when he learned that Mr. Eastwood, who had purchased the rights to “Hereafter,” was already filming off the original script. Though known for writing on spec and resisting the traditional development process, Mr. Morgan had been looking forward to working with Mr. Eastwood. “I imagined we’d have all sorts of conversations about the characters, about the plot,” he said. “But we never did. What you see on the screen is this thing I wrote very sketchily in the mountains of Austria." Mr. Eastwood said he typically works this way. “I believe very strongly in first impressions,” he explained. “When something hits you and excites your interest, there’s really no reason to kill it with improvements.”

In other words, Eastwood shot the first draft.