SO GLAD I DON'T HAVE TO READ: Great House 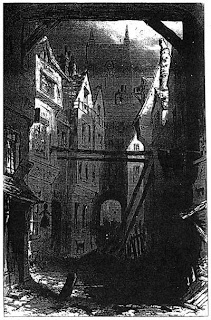 There I was, thinking the New York Times's critics had gone all soft on us and today they publish a delicious take-down of Nicole Krauss's new novel, Great House. The reviewer is Rebecca Newberger Goldstein, whose work I am unfamiliar with but who's flashing critical scimitars I will now have to look out for — her review is a whirring masterpiece of irony that cuts so deep you don't even know you've been nicked. She begins it sedately enough, by comparing the book to Krauss's last novel, The History of Love.

How much does her new novel, “Great House,” resemble its predecessor? The good news is: very much indeed. And the good news is also: not so very much.

You might almost suspect her of praise at this point, so gnomic a spell does she cast, but gradually — oh so stealthily — the sureness of her aim becomes clear.

In themes and preoccupations, “Great House” and “The History of Love” overlap. Both explore shattered characters, with pasts blasted by the sort of loss that makes even the pretense of normal life impossible.

Shattered characters, blasted by loss, the absence of anything resembling normal life — exactly the kind of stuff people go to literary novels for, but never so mercilessly summarised. Maybe too merciless. Ms Goldstein can perhaps be forgiven her parenthetical expansion.

(By “normal life” let us mean one in which certain premises can be assumed — for example, that it is possible to put one foot in front of the other, on the way to meet a lover or to buy a loaf of rye bread, without being overtaken by tremors issuing from convulsions of the moral order.)

The narrative structures of both books mirror the characters’ own shattering and require readers to reassemble the full story for themselves. And both books coalesce around artifacts from the past. In the case of “The History of Love,” it is a book; in the case of “Great House,” it is a writing desk... Writing — at least when it is great — is a kind of consecration, placing its practitioners in the way of assaults from large truths and perils.

So true. And so perilous. So truthfully perilous, and so perilously truthful. There you are, the front door closed behind you, loaf of rye bread in your hand, the tremors from the convulsions of the moral order barely subsided, thinking up a nice pastrami sandwich — fatal error! — and the assaults of large truths hit you right in the kidneys. Let the whittering nabobs of the literary scene retreat behind their own cocked cuticles, Goldstein lays it out straight: this is indeed a novel about a piece of furniture. The characters, on the other hand, are all lifeless stiffs.

The characters of “Great House” lack all trace of exuberance. Normal life does not beckon them. They inhabit their sorrow with a lover’s ardor, cultivating it into an art form. There is a forbidding, and seductive, remoteness about them that captures those who draw too close and then can get no closer.... These narrators are marooned in a terrible place, unable to return to the safe shore of normal life, unable to follow their enchanters into the deeps where only they can breathe. Their enchanters are themselves enchanted with their own sorrows. They have been shaped around what it is they have lost, a central idea in “Great House” — in fact, the meaning behind its title.

To which all I can really say is: thank you. Much as I like to avoid tilling the vegetable patch of my own private woes, I do so enjoy listening to the next man's, and on the page only more so. How often one has heard a promisingly dreary novel ruined by an insistence on plotting, or an accidental joke, or a sense of "perspective" — dread word! — arising from the selfless perspectives of fiction. Not this one!

It sounds marvellous. I only wish the New York Times would be more careful about who they send these books out to.
* An occasional series devoted to one of the most important aesthetic decisions a consumer can make. It is this blog's contention that the swampy substrata of hints, intimations, and precognitions sent off by a book, movie or album in advance of its arrival, as imbibed via reviews, posters, and TV spots, allow consumers to reach conclusions every bit as rich as those they make while watching or reading the thing.