Oh that's alright then: one in four were bad guys 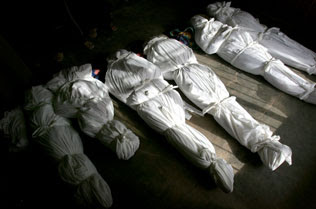 "It appears that there were some 100,000-120,000 Iraqi deaths during the war, with a quarter or more of them hostiles (terrorists and others opposing the new Iraqi government or foreign troops.) The fact that over 90 percent of the dead were adult males is also an indication of warfare, not just random killing. Most of the women and children killed were the result of car or truck bombs in crowded places, or kids playing near where a roadside bomb was planted." — Strategy Page

It's worth remembering, as everyone getting into the swing of deploring the benumbed tyranny that is Obama's America: he hasn't invaded anyone by mistake yet. Nor has he authorised the use of Gestapo torture techniques on prisoners of war. He's been quite unbending — some might say doctrinaire — on the matter of sodomising the enemy, threatening to drill holes in their heads and throwing them into coffin-shaped boxes filled with insects. Sigh. Every day that goes by is a day in which another iraqi goes unsodomised, another foreign country uninvaded, another prisoner untortured. And in its place? Just a tickertape stream of judicious, well-informed decisions, day in, day out, from the moment he gets up to the moment he gets to bed. How tiresome it all is.