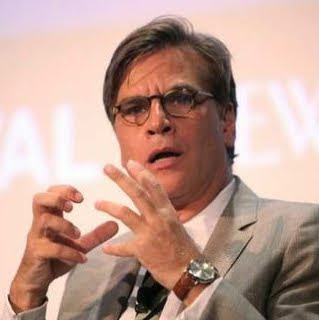 "The Democrats have moved to the center, but the Republicans have moved into a mental institution. I'll take the Democrats." — Aaron Sorkon on CNN's Parker Spitzer Show

Sorkin also called Sarah Palin "an idiot, come on.... a remarkably, stunningly, jaw-droppingly incompetent, mean woman," at which point he was challenged by Kathleen Parker. "What is your evidence for that?" A difficult question, to be sure. We form our impressions of people pointillistically, over a period of time, from many sources. Unsurprisingly, he flunked it, instead rounding on the one statement of hers — about "real America" — he he found most obnoxious. A shame, not because it isn't obnoxious but because there is plenty of evidence of her meanness: the grudge matches, the vendettas, the scorched earth policy with regard to almost all of her old colleagues. Apart from her ignorance, it's the most worrying thing about her: the absence of long-term working relationships that haven't ended in mutually assured destruction — everywhere she looks, brunt bridges, the charred remnants of former alliances — although as I keep reassuring my wife, it's more worrying for Palin than it is for us. It suggests basic incompetence as a politician, not a person, although I do also think it would be pretty unpleasant to have personal dealings with her.