REVIEW: Let Me In 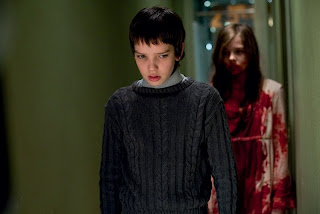 Drat. How one regrets passing up an opportunity to pronounce a Swedish original better than an American remake. Much as it would please the international cineaste in me, not to mention the rabid Swedofile, to call Matt Reeves' Let Me In an inferior remake of Tomas Alfredson's matchless original, fairness compels me to say that the two probably about come out even. Who can say. If I came across the Reeves' first I would probably love it as ardently as I do the Alfredson, but both are marvels: rich, strange, moonstruck — everything the Twilight films want to be and are not. On the debit side, the score of the new one is clunkier, with more ominous wheezing and sawing on the double bass; the special effects are much better and therefore, just a bit worse, particularly in a sequence involving the felling of a jogger in a tunnel; there's an unwelcome push into the overtly sexual, by about a degree; and New Mexico just doesn't do it for me in the way that suburban Stockholm did. On the plus side: there's an uptick in Hitchcockian sympathy for the dad as he goes about his murders; he's played by Richard Jenkins, which is always nice; the friendship between the kids is more satisfyingly dramatised; and the girl is played by Chloe Grace Moretz, the angles of whose face are the most fascinating since Alicia Silverstone's. I just don't remember Silverstone unzipping people's jugulars with anything like the same panache. B+