Running out of movie stars 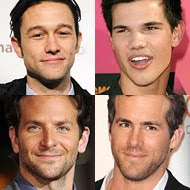 "One of the running gags at Saturday night’s 24th annual American Cinematheque Ball was how strange it was to be honoring a movie star who hasn’t yet cracked 40. “What can you say about Matt Damon that hasn’t been said about Brendan Fraser?” roasted Jimmy Kimmel. “You’re here tonight because were running out of stars." — Anne Thompson

The Vulture casts an eye over the current slabs of beef jockeying for position once Harrison Ford, Bruce Willis, and George Clooney hang up their spurs. I feel like we've found the limits of Tobey Maguire pretty quickly. Jake Gyllenhaal strikes me as efficient, impeturbable and a little unexciting. Ryan Gosling needs to share the joke with the rest of the class. Leonardo di Caprio needs to break up with Martin Scorsese if he is to rediscover any of the freshness he showed as a gangly kid. Most of the candidates The Vulture comes up with — Zac Ephron, Robert Pattinson, Channing Tatum, Taylor Lautner — are just soda pops who will have lost their fizz in a few years. Sam Worthington seems like a premature attempt to replace Russell Crowe. Ryan Reynolds, Gerald Butler and Bradley Cooper all seem to have been drafted in to help out until the real movie stars turn up. The ones that interest me the most are Chris Pine who showed languid charisma as the young Captain Kirk in Star Trek, Jay Baruchel for his nervy pubescent routine, and Shia la Beouf: the way he zeroed in on the girl in Disturbia was almost a special effect in its on right, like that famous reverse-zoom Hitchcock used in Vertigo. Of those the Vulture don't mention, I'd single out Michael Cera and James Franco who is turning into quite the jack-in-the-box.