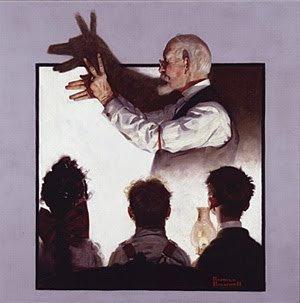 "When I first read about this on Carrie Rickey's Philadelphia Inquirer blog I was reminded that the Rockman-esque influence is one of the biggest reasons why I despise Spielberg these days -- i.e., because his films have been offering allusion after allusion and tribute after tribute to that sentimental notion of small-town America that Rockwell's paintings are more or less synonymous with. I for one have always found this aspect of Spielberg's films to be treacly and un-genuine"— Jeffrey Wells, Hollywood Elsewhere

'Reversible Opinions' is an occasional series devoted not to untruths so much as exact inversions of truths — statements that, if reversed, would be true. People should be allowed to despise who they want, of course, but if you're going to despise Spielberg it's probably best not to do so for his portrayal of small-town America. I can't actually think of a single film of his set in small-town America. I can think of many that are set in the suburbs of large cities: Close Encounters of the Third Kind, which is set in Muncie, Indiana for example, or E.T. The Extra-Terrestrial which is set in the suburbs of Los Angeles. Spielberg is synonymous with romanticising the suburbs, not small towns. Or used to be synonymous, before he started making movies like Saving Private Ryan and Munich. So if by "these days" you mean "thirty years ago" and if by "small towns" you mean "the thing that destroyed small towns," then yes, you have the beginnings of a point. He's very Rockwellian.