Why prequels leave nothing to chance 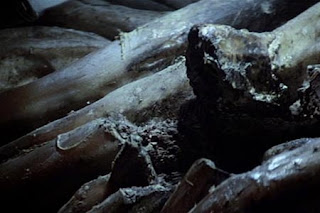 It's set in 2085, about 30 years before Sigourney [Weaver's character Ellen Ripley]. It's fundamentally about going out to find out 'Who the hell was that Space Jockey?' The guy who was sitting in the chair in the alien vehicle – there was a giant fellow sitting in a seat on what looked to be either a piece of technology or an astronomer's chair. Remember that? And our man [Tom as Captain Dallas] climbs up and says "There's been an explosion in his chest from the inside out – what was that?" I'm basically explaining who that Space Jockey – we call him the Space Jockey – I'm explaining who the space jockeys were.

And from the Alien DVD commentary:—

I think the "space jockey" is somehow the pilot and he's part of a military operation – if that's the word you want to apply to his world – and therefore this is probably some kind of carrier, a weapon carrier, a biological or biomechanoid carrier of lethal eggs; inside of which are these small creatures that will actually, fundamentally integrate in a very aggressive way into any society or any place it's dropped.

I always thought the point of the space jockey was that he was a previous carrier/victim of the alien. It was a point about how lethal the alien species were: even other aliens ran scared from them. The eggs in the ship? A trap for the next victim. That's the problem with prequels: they suffer from over determination, and an intolerance for randomness. Tatooine was the point "furthest" point from the centre of the universe, until it turned out to be the radial point around which the whole saga revolved. Hannibal Lecter's mask was strapped onto him by the FBI for transportation to Memphis to see Senator Martin, until it became a favored memento of his sixteen-year-old self. The same with the space jockey. We're either just looking at victim number 237, or we're looking at an important chapter in the evolution of the alien species. It can't be both.