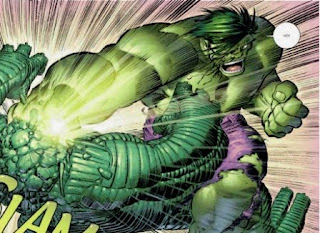 I'm not sure why it is that there are so few good comic book adaptations given the number of them that are made. Maybe the debt summer movie-making owes the comic book is so great as to resist so direct an arrow. The better known comic strips — Superman, Batman — come too freighted with expectations to avoid capsizing as films, while some of the lesser-known comic books can sneak up on the inside and land the required knockout: Men In Black, Iron Man, Hellboy. My own personal preference is for Golden Age boosterism, rather than the darker, grungier reinventions that came later. I've never much liked the graphic novel, I guess because I got my own comic reading out of the way early — age 8-14 — so I have a fairly prelapserian appreciation of the form, associating it with escape, excitement and great jokes, rather than glowering skies, troubled morality and hooded retribution. The Dark Knight, while impressive, took itself too seriously for my tastes. Superman was always my first love, and DC comics rather than Marvel whose characters came too loaded with superpowers and looked too glitzy — like Cadillacs. I'm sure that's my British roots showing through. I always preferred the ones with properly grounded alter egos — Clark Kent. Bruce Wayne — so that the moment of transformation was all the stronger. That was always what it was about for me: the ripped shirt in the telephone box, from wimp to warrior. The X-Men bored me because they were just the x-men, 24 hours a day. No superheroes in combination have ever worked for me. How super can they be if they seek safety in numbers? I loved the first Superman which, for all its faults, spent time getting Clark Kent right. I disliked all of the Tim Burton Batmans: the guy simply has no feel for action and that's about all that can be said. It's like being a director of musicals who is tone deaf. Sam Raimi has comic-books in his veins, but the Spiderman films suffer from truly ghastly effects and art direction — they look like they were all shot in a car salesroom — but Spiderman 2 is the best-looking and has the best villain. I loved the macro-micro inversions of Men In Black — Barry Sonenfeld caught the sensibility and humor of the strip perfectly. It's short, too, at 98 minutes, just as The Dark Knight is an hour too long. I like compactness in my comic book adaptations — speed, wit, agility. My winner may surprise some people, but Jon Favreau's Iron Man is a tightly-plotted origins story with an unfakeable flair for the material. It is smart without being cynical; the flying sequences — blissfully void of soundtrack — are spectacular without being otiose, and Favreau's background in comic improv pulls loose, funny performances from his actors. It's the complete package. That's the trick to winning these things, I've come to realise — not ambition, or size, or length, or breadth or what have you. It's about quietly, patiently making sure you tick every box.