THE BEST OF: Matt Damon 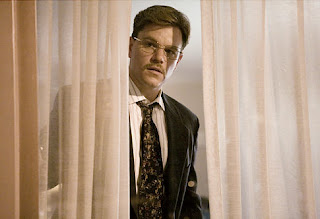 Intelligent Life asked for a rundown of Matt Damon's career. Here's what I wrote, more or less. I wish I'd made more of the anger you occasionally see break surface — in Ripley, but also Bourne and in some of the interviews he gave around it. He sometimes seems a little too decent for Hollywood, like an intelligent man fulfilling a dumb brief to the best of his ability, when what he's really like to be doing is.... but then that's the mystery about Damon. The thing he'd rather be doing if acting weren't around. Microfinancier? A star of the college lecture circuit? Whatever it was, he would probably be rich and successful and self-mocking and a little guilty, like a Kennedy.

1) Will Hunting: Good Will Hunting (1997) The role of Will Hunting is the kind of thing Marlon Brando used to daydream about: a slob genius, a street intellectual, a prodigy hoodlum from South Boston who works as a janitor at MIT. In Ben Affleck’s and Matt Damon’s favour, they wrote it originally as a thriller — Will is targeted and recruited by the FBI — but were persuaded otherwise. The result was a movie for, about and by those who adore young men. If Damon blinked, the whole enterprise would have faltered, but he holds his nerve, delivering punchy line readings as if pinning his ego to the mat. He would never allowed himself to be so adored, nor his hair so highlighted, again.

2) Private James Francis Ryan: Saving Private Ryan (1998) So Tom Hanks' men stagger up Omaha beach and battles his way through through occupied France, losing Vin Diesel and Giovanni Ribisi along the way. “This Ryan better be worth it,” he quips. “He'd better go home and cure some disease or invent a longer-lasting lightbulb or something.” And who do we get in the role? Matt Damon and his amazing kilowatt smile. Spielberg is know for getting first dibs on the hottest young stars; he whizzed Jennifer Garner into Catch Me If You Can before she could draw breath, casting her as a femme fatale of all things. The same here. The casting probably worked for the three week gap between the January release of Good Will Hunting and the Oscar nominations, but Damon gets one good scene with Hanks, telling a bawdy joke about his brother which brings on a gale of laughter then catches in his throat.

3) Tom Ripley: The Talented Mr Ripley (1999) Damon began his career with a rash of eponymity: first Will hunting, then Private Ryan, then Tom Ripley, as if playing a joke on his own surge from anonymity. Some of that odorlessness was to linger: the actor has an abiding interest in nowhere men, doppelgangers, Zelig figures. The role of Tom Ripley was served up with more murderous relish by John Malkovich, but Damon’s damp-palmed wannabe, his smile held in place just a few beats too long, was an appropriately nervy neophyte: this was, after all, an “origins” story. His final murder is the act of a man snuffing out his last chance at happiness. Now the games could begin.

4) Linus Caldwell: Ocean’s 11 (2001) If you had looked at Affleck and Damon in 1998 and tried to predict which one was going to be the big handsome movie star and which one was going to be the self-effacing student of cinema, you would have had them swapped, I think. But it was Affleck who ended up playing bozos in blockbusters, and Damon who proved the more serious-minded of the two — self-effacing, decent, slightly stolid, with acute powers of self-mockery. There was a entirely becoming modesty to his acceptance of the role of Linus Caldwell in the Ocean's films, the pushy pickpocket forever playing second fiddle to George Clooney and Brad Pitt, the film’s main romance, although as the series went on, Soderbergh made more use of him, striking up the comic alliance that would lead to The Informant.

5) Jason Bourne: The Bourne Identity (2002) The first real flex of his leading man muscles. Damon’s German costar in the first Bourne movie, Franka Potente, the star of Run Lola Run, told him that there was no way to run on film and look good. So he practiced Jason Bourne’s running style until he got it right. You could argue that’s all there was to the role — that the role of the amnesiac assassin, Jason Bourne, amounts to no more than an advanced calisthenics class, but Damon has something of Harrison Ford’s instinct for the right measure of athleticism and perplexity. Sometimes, screen acting is measure in inches and seconds: a narrow ledge, a flash of panic, a step to the left, grateful fingertips.

6) Colin Sullivan: The Departed (2006) The Holy Grail of any young actor: a part in a Martin Scorsese picture. Also, the chance to square off against Leonardo Di Caprio. The two actors play inversions of one another — Damon as Jack Nicholson’s mole within the police department, Di Caprio as the police mole in Nicholson’s crew — and yet one of the disappointments of Scorsese’s film was you never got to feel any static, any electricity, between his two leads, as you did in Michael Mann’s Heat, say. The best thing Damon does in the film is seduce psychologist Vera Farmiga by insulting Freud over dessert. Who wouldn’t.

7) Mark Whitacre: The Informant (2009) The Ocean films told us something new: Damon is surprisingly good at playing company men, pencil pushers, nerds. Soderbergh returned to that vein and opened it out into a rich seam for his film about the bipolar corporate whistleblower Mark Whitacre —Erin Brockovich’s “wacky little brother.” Damon rises to the occasion like a puffball; newly doughy, he deploys his bluff good humor to deliver his best performance, a fascinating extension of his earlier interest in ciphers and zelig-men: a portrait of a man utterly lost to himself, smiling and waving as he steps off the edge of the cliff. His Dorian Gray. 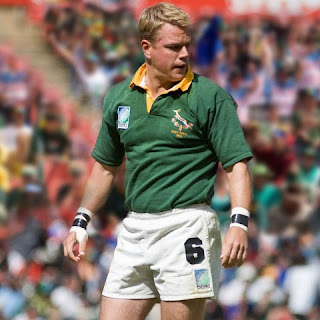 8) Francois Pienaar: Invictus (2009) “I play taller on screen,” were the first words of Damon (5’ 10”) to Springboks captain Francois Pienaar (6’ 4”) upon meeting him at his home in South Africa. He bulked up for the role, trained with the team’s rugby coach, and while his accent was not quite as good as Di Caprio's in Blood Diamond, Damon received an Oscar nomination for his pains. The mind-fit with Eastwood was a lot better than that with Scorsese: he's not a Scorsese firecracker, but shares Eastwood’s dislike of swank and show. Their reunion on Hereafter is to be eagerly anticipated.