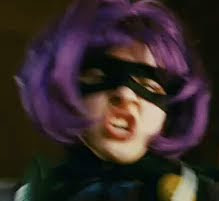 I've read and reread this sentence and I cannot for the life of me work out what it means. "Zip-zipping" I'm taking as an even zippier version of zipping — i.e. moving along speedily — but how does one do that "self-consciously"? I suppose it's possible to move self-consciously, i.e. a little awkwardly, too focussed on oneself to be properly graceful, and yet somehow I don't think this can be what Bolohnik means, otherwise otherwise why the zip-zipping? After much pondering, I think she must mean two entirely separate things. 1) this movie* is fast. 2) this movie is self-conscious. Ideally, one would like a sentence that combines both ideas in sinuous counterpoint. Failing that, you just jam them into the same sentence, hoping. Blahblahnik's writing is like that: a string of little watch-me moments, each one of which makes you pause, sit back, and think to yourself, "well that doesn't work." Zip-zipping self-consciously, indeed.

*The film is Kick-Ass, and it's the most entertaining thing I've seen all year: a much more successful Tarantino ripoff than even Tarantino seems capable of these days — a true sick-puppy classic. I loved the cheap costumes and the on-the-nose superhero names (Kick Ass, Hit Girl: exactly the kind of thing a kid would come up with). The script has a filthy, insolent wit, although I disapprove of the c*** word, on the grounds that it is British idiom, not American. The director, Matthew Vaughn, shoots in toasty saturated colors, and I loved the climactic shoot-out lit only by muzzle-flash. Why has no-one done this before? Delivering another of his terrified-sarcastic uber-nerds, Christopher Mintz-Plasse is seemingly incapable of a bad line reading, and Hit Girl, well... *sigh* What to say? Call me old-fashioned but I could watch Chloe Moretz unzip the jugulars of bad men all day.