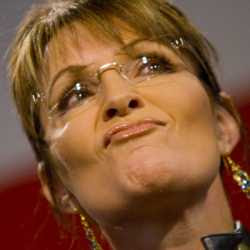 "What truly distinguishes Palin’s speech is its utter subjectivity: that is, she speaks very much from the inside of her head, as someone watching the issues from a considerable distance. The there fetish, for instance – Palin frequently displaces statements with an appended “there,” as in “We realize that more and more Americans are starting to see the light there...” But where? Why the distancing gesture? At another time, she referred to Condoleezza Rice trying to “forge that peace.” That peace? You mean that peace way over there – as opposed to the peace that you as Vice-President would have been responsible for forging? She’s far, far away from that peace."— John McWhorter

It's a reverse zoom: a long way distant is precisely where she wants to be when asked questions of this nature. "That peace" is shorthand for "you know, the peace we all know about so well and which you will therefore not be wanting to ask me any more questions about" or more precisely: "Get me out of here!" Chris Bowers argues that her nomination as the Republican candidate for President in 2012, assuming she runs, is a lock.
Pretty please with sugar on top.