Where are the great British political orators? 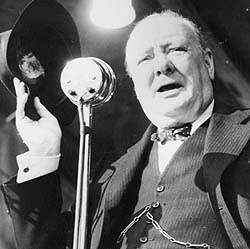 "Watching Germany rise from its knees after the war and become a vastly more prosperous nation has not been easy on the febrile British psyche. All nations have a cross to bear, and none more so than Germany with its memories of Nazism. But the British cross is more insidious still. A misplaced sense of superiority, sustained by delusions of grandeur and a tenacious obsession with the last war, is much harder to shake off. We need to be put back in our place."— Nick Clegg

Not much to disagree with there, although The Daily Mail seems to think it's damaging. I'm not so sure, but then what do I know: the whole thing seems positively Blefuscun when compared to the last year's epic. As Andrew Sullivan pointed out, America has drifted so far right in the last decade, and Britain left, that the differences between the parties, from this vantage point, seem negligible; the TV debates play out like a disagreement between different factions of the Democratic party. I'm also struck by their shared failings as speakers. What has happened to political oratory in Britain? I notice it more with Clegg, because he peppers his speech with more Obamaesque invocations of "Hope" and "change" than the other two — eeek — when what he excels at is that warm, earthy beside manner that all politicians since Blair have tried to cultivate. Brown has some stentorian gruffness but is resolutely incapable of lifting his listeners more than five feet off the ground. Cameron sounds the most leaderlike, with touches of that old Tory resolve that Thatcher did so well, but he to tries to soften those old Etonian tones too much: it sounds phoney as hell. They all sound like smart, reasonable men — bank managers doing their utmost to sound cuddly, or veterinary surgeons soft talking their way around an outrageous bill. Where is the steel? The punch and fire? Nobody expect a Churchill, but a Tony Benn would be nice.