The sound of spring: 'Go' by Jonsi 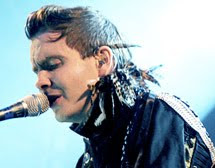 This is be the first album of 2010 I've fallen head over heels for. I'm a little embarrassed by how much I love it. I can't explain it. It's just chemistry. I certainly don't expect anyone else to share my enthusiasm. I can hear only too well how closely the music hovers on the borderline of the Fey, somewhere not far from the capital of Precious. Disliking it would be a whole lot easier. Loving it feels a bit like loving some slightly sickly, odd-looking kid who you wish would stand up straight and stop sucking its thumb. But what can I do? It's my sickly-looking kid who can't stand up straight or stop sucking his thumb. At least he's singing in English, and not Hopelandic, or whatever made-up Cocteauish language he was singing on the Sigur Ros albums, all of which left me cold, or if not cold then just a few degrees below room temperature. Too much noodling, not enough oomph. There's noodling on this one, too, but its noodling with a higher purpose: noodling plus oomph. It sounds like an album composed on whatever was to hand, as if inspiration hit in a toy shop, or an aquarium, and there was simply no time to waste: just start banging it out and singing. I have a real weakness for male Sopranos. Birgisson sounds like an Icelandic Jon Anderson, with something of Bjork's absent-mindedness, as if he were only accidently singing out loud. It's almost ickily private. I'm still not exactly sure what's he singing about; there seem to be some friends and maybe a love affair plus some sort of dragonish creatures in there, but most of the time he sounds as if communicating something very intently, the way children do, even though what comes out of their mouth may be half-nonsense. And the music — majestic and rolling and odd and beautiful and purposeful in the manner of animals building something. Termitic art, if ever I heard it, but sweet and bouyant, as if it composed entirely by bees. If ever an album caught the arrival of spring after a long, long winter, this is it. Love it, love it, love it, love it, love it.