A royal toast to our new front-runner 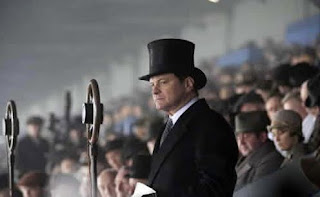 I must admit to a silent flutter of pleasure at the sudden ascendency of The King's Speech, and not just because it's fun to see all the Oscarologists tearing their hair out, although it is satisfying to read this sort of thing:—

"I said on my last Oscar Poker podcast that if Tom Hooper won the DGA I would quit. The reason being, not out of disgust — it is their choice, their club, their statuette. But because it would show that I learned absolutely nothing in the eleven years I’ve been doing this website. And that is absolutely true: I know nothing."

Nor is it because I think that King's Speech is a better movie than The Social Network. But I do appreciate this reminder of the stubborn independence, epistemologically speaking, of the filmmaking community from those writers and journalists paid to supply commentary on it. Flying in the face of four long, long months of wanton theorising, predictive analysis, statistical break-down, voodoo incantation, rain dancing, star gazing and tea-leaf reading on the Oscar blogs, Tom Hooper's win at the DGA has the reassuring thunk of reality. Attempts to guess which way the Academy is going to leap have always struck me as a queasy blend of wish-fulfilment, projection and outright patronisation. First everyone had AMPAS down as old farts who could not disentangle themselves from their oxygen tanks for long enough to fill out their own ballots, leaving it to their nurses to do it for them, and ensuring easy victory for films like Driving Miss Daisy or Scent of a Woman in which some young pup tends to the palliative care of an aged film legend. Then, thanks to a belated achievement Oscar for Martin Scorsese (for a tonally berserk crime thriller) a final acknowledgement of the Coens (because there was nothing else to vote for that year), Academy members underwent a Pimp-my-Ride makeover — ta da! — into snazzy young Sight-and-Sound-reading hepcats, snapping their fingers to the latest Tarantino soundtrack and discussing auteur theory into the wee small hours. Neither guise ever struck me as all that convincing. The stodgy old fart rap was merely a side-effect of the blandifying effects of any electoral process, and the hepcat stuff was just a mirage created by the sheer desperation that has beset the task of choosing a winner these last few years. You think the Academy wanted to reward Scorsese for The Departed, a film in which every main character but one ends in a fine misting of brain matter and splintered jaw fragments? You think that if a movie like Driving Miss Daisy or Gandhi were around, the academy wouldn't have been all over them in a heartbeat, rather than queue up to pin a medal to the chest of Javier Bardem as he punches in the skull of yet another sheriff in No Country for Old Men? You think they wouldn't have crushed the indie-spirit of The Hurt Locker in a second if Avatar hadn't been about blue people? Wake up, people! The only reason the academy has been unable to reward a film like Driving Miss Daisy or Gandhi recently is because Hollywood doesn't make films like Driving Miss Daisy and Gandhi any more. The entire middle class has dropped out of the filmmaking ecosphere. Liberal weepies are dust. Sweeping epics are done. Loin-cloths are out. The only examples of 'Oscar' movies we've had recently have been duds like Invictus and The Blind Side, undernourished and overlit b-versions of the kind of film that used to get 'A' treatment and clean up at the awards. The academy haven't lost their taste for Oscar bait. They just haven't been let near a healthy enough specimen. They're like drunks who've managed to stay dry for several years not because they have lost their taste for alcohol but because nobody has offered them a drink. The Brits have finally done it with The King's Speech. Evidently they didn't get the memo about cratering the forehead of their hero before the end credits foll. I say, Bottoms up, old bean! Pip Pip!