Palin through the looking glass 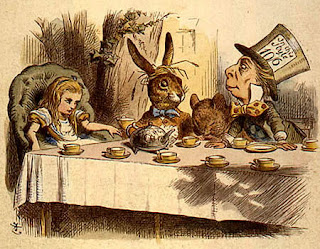 “It was inappropriate at the outset to blame Sarah Palin and others for causing this tragedy or for being an accessory to murder,” Abraham Foxman, the group’s national director, said in a statement. “Palin has every right to defend herself against these kinds of attacks." But Mr. Foxman added that “we wish that Palin had not invoked the phrase ‘blood-libel.’ ” He called it a phrase “fraught with pain in Jewish history.” — New York Times

Everything comes full circle in the carnival going on inside Plain's head. Those who assert a link between targeting a congresswoman with rifle sights and the actual assassination of that congresswoman are committing "blood libel," a term reserved for the defamation of the Jews by Christians. One of the people asserting such a link is the assassinated congresswoman herself, who warned in March that such violent rhetoric "has consequences." Thus, does a Christian accuse a jew of blood libel. Voila! As Alice once said, "If I had a world of my own, everything would be nonsense. Nothing would be what it is, because everything would be what it isn't. And contrary wise, what is, it wouldn't be. And what it wouldn't be, it would. You see?”