SO GLAD I DON'T HAVE TO SEE*: Biutiful 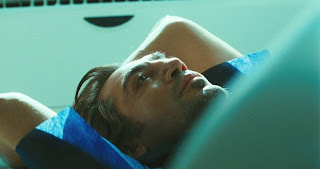 "But Biutiful outstays its welcome, and the director can't resist a tempting tangent, darting down the side streets of the plot in pursuit of the foreign workers and their grinding lives. Ethically, this is commendable, but it throws the arc of the drama out of whack.... Nonetheless, the film should be endured, for the sake of it's leading man." — Anthony Lane, The New Yorker

Not for the sake of the leading man's performance, mind you, but for the sake of it's leading man, as if Bardem's feelings might be hurt if we do not go. Lane is not saying 'the film is something to be endured, but Bardem's performance is a treat'. That would be a nonsense, for Bardem is the on screen for most of its running time; an enjoyable central performance from him would lift the film firmly from the 'barely endurable' category. No, the film must be endured "for the sake of its leading man," which is to say, because Bardem is a talent and one ought to be supportive of talented people's work, even if it is something to be endured. Hmm. I wonder if he would say the same if this film weren't Spanish. I am one of Anthony's biggest fans, but at best this is unpersuasive and at worst it's codswallop. Another two hours of my life back. Shit. What to do.
* An occasional column devoted to those books, movies and art works which would, on balance, better serve us by remaining unread, unwatched and unseen, based on the principle that the reactions we have to absent art works can be every bit as enriching as to those demanding our urgent personal attention