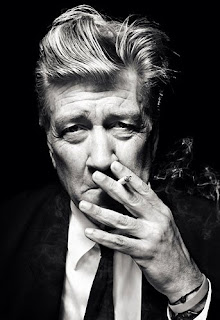 On the occasion of David Lynch's 65th birthday, Flavorpill posts 65 little known facts about the director. Ten of the best:—

1. The script for Eraserhead is only 21 pages.

2. On his 15th birthday, Lynch worked with his fellow Virginia Eagle Scouts seating VIPs in the bleachers outside the White House at John F. Kennedy’s inauguration.

3. He claims to have eaten lunch at Bob’s Big Boy in Los Angeles nearly every day for eight years straight, from 1976 to 1984.

4. He voices the character of Gus the Bartender on The Cleveland Show.

5 He is a fan of the Bourne trilogy. He likes the first one the best.

6. For part of the 5-year-long Eraserhead shoot, Lynch supported himself with a paper route, delivering the Wall Street Journal.

7. Childhood friend Toby Keeler once asked Lynch what Wild at Heart is about. Lynch responded, “It’s about an hour and forty-five minutes.”

9. He has written two comedy features, Dream of the Bovine and One Saliva Bubble, both of which remain unproduced.

10. Lynch on the real life inspiration for the opening of Lost Highway: “I woke up one morning and the intercom rang, and a man says, ‘Dave!’ and I said, ‘Yeah,’ and he says, ‘Dick Laurent is dead.’ And I said, ‘What?’ And there was no one there… I don’t know who Dick Laurent is. All I do know is he’s dead!”