Best (and worst) of the Golden Globes 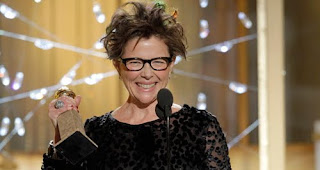 "What can be the silliness of the Golden Globes matched up with the seriousness of the critics on Sunday night as the Social Network took the prize for best drama..." — New York Times

I love that "what can be the silliness of the Golden globes" as the writer takes the impetuous thrust of judgment and submits it to the tempered sobriety of the Old Grey Lady. He'd love to write "the silliness of the golden Globes," of course, but some sub-editor would invariably point out that while the Golden Globes have on occasion been found "silly" they haven't been found so on a 24-hour, round the clock, 7-day-a-week basis. It might be argued of course that, in the interests of objectivity, even a temporary attack of silliness requires further explication. On what occasions has silliness descended? Having descended, might it not one day depart? And in whose eyes? Might it be the case that what one person finds silly, another person finds jolly? Perhaps the sentence should read, "What can be, on occasion, and in the eyes of some beholders inclined to judge such matters in a less than flattering right, the silliness of the golden globes...." But even that leaves a few cracks through which the fog on incomprehension might creep. Best leave well alone, I think, and get on with the bestowal of TBTTM's own gong-show gongs.

Heedless irony of the evening: E Entertainment's 'Black Swan' make-up tip segment enabling viewers to transform themselves with "that magical black swan ballerina look," thus reversing the entrenched war against death-by-prettification waged by Aronofsky and his movie. More apropos, of course, would have been some Barbara Hershey toe-nail clippers and Portman-patented hangnail strippers, designed to leave each of your limbs a bloody stump whose rorschach spatter patterns symbolise the rape of innocence by the Greek god Zeus. Even Portman herself seemed to have defied her director's purdah-like edicts on the color pink and slipped into a diaphanous pink Dior gown. We can only pray that her punishment will be swift.
Weirdest speech: Robert De Niro. He doesn't say anything for 40 years, doesn't crack a smile let alone a joke, and when he does finally open his mouth he launches into a rusty old Rupert Pupkin monologue stocked with leering, year-late references to Megan Fox's hotness? The promo reel looked suitably mythic; the speech lanced the myth.
Worst Speech: David Fincher. Some teenage breast-beating about how"misanthropic" and "pitch-black" he usually is, together with some unconvincing snarls about how little public approbation means to him. Stay home, then.
Most revealing cutaway: The look on the faces on Fincher's actors to see their captain ("Oh captain my captain") stammer and blush, debutantishly, at the podium as he told everyone how little they meant to him. It was rather like the look on Dorothy's face when the curtain is drawn back by Toto to reveal Oz as a huffing, puffing, tinpot imposter.
Worst Hair: a close contest between Annette Bening, who looked as if she had recently stuck her fingers into an electrical socket and Al Pacino who should be congratulated for the safe haven he offers passing families of nestless rodents.
Favorite thank-you: Bening thanking "the winner of the 1962 Golden globe for best newcomer of the year," aka Warren Beatty.
Classiest speech: Aaron Sorkin, for his courtesy to Mark Zuckerberg, his boosterism for elites and smart women.
Worst news for Ricky Gervais: even Hanks went after him.