The year of Obama: how's he doing so far? 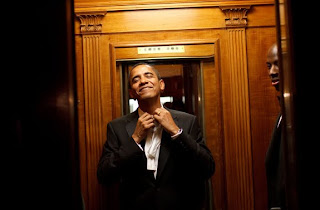 As someone who campaigned for Obama last year, in the all important swing state of Ohio, I sometimes get asked what I think of the job he's doing. It's a difficult question to answer because I am never believed. People expect me to be more worried by this opinion poll, or annoyed by this quote, or concerned about this optic. Does he risk seeming professorial? Does he look a little too passive? Does he sound tough enough? They are asking me to comment on the appearance of things, in other words, which is the political question par excellence. How he is really doing, in terms of concrete effects, will obviously take a little longer to determine. Certain things, however, are evident. America has returned to the rule of law — an immensely reassuring development. It sets a good example to young children if the people in high office turn out not to be criminals. It also helps those office-holders' holiday plans if they can travel abroad without being arrested. Similarly, so far as I can tell Obama has not invaded any country under a mistaken or illusory set of beliefs. This is also important — not invading other countries by mistake. If millions are going to die it shouldn't be because the other guy was looking at you funny. Also, US military personnel have stopped torturing their prisoners — also good. Taking power drills to the heads of foreigners simply doesn't look good, no matter how adept you are at explaining it to their respective embassies. Ditto, threatening to crush the testicles of their children and sodomising their wives — a definite no no! The economy was stopped from imploding and a second great depression was narrowly avoided. Good. I like the movies made during the Great Depression — Sullivan's Travels is a particular favorite — but the diet wasn't everything it could have been, I hear. Something was done to correct the healthcare system so you don't go bankrupt when you catch a cold. Good, also. Buying a plane ticket to England every time I got sick wasn't going to be workable in the long term. What else. America is no longer the byword for international lawlessness, acts of sodomy in all the major theatres of war are way down, no major countries invaded by accident, economic catastrophe averted, the biggest single piece of social legislation in 40 years, a restructured US car industry, the appointment of a Latina Supreme Court justice... no I guess that's it. It could be better, I guess, but Rome wasn't built in a day.