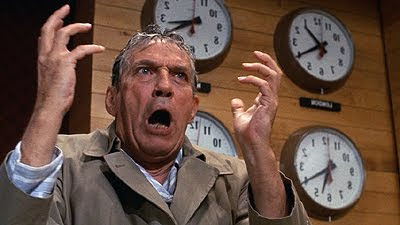 What a world of pain is the lot of the Oscar blogger! I've been reading them for a couple of months now and have grown familiar with the chorus of high dudgeon they strike up when their picks are not echoed by this or that awards panel. It's hard not to feel a little sorry for them and their pained attachments to this or that film, lugging them around like favorite lamps. This one hearts The Lovely Bones ("dangerously close to a masterpiece") and thinks the world is going to hell in a handbacket because nobody else seems to agree. That one has an intense dislike of Monique and cannot believe the press she's getting ("What's it going to take to get critics to stop reflexively handing Mo'Nique their Best Supporting Actress awards for her Precious performance? Will some of them please get a grip?"). The cause of all this agony is fairly easy to spot: they've seen the movies. And had opinions about them. Not only that but they've seen the movies early, often at festivals, which is a bit like falling in love on Holiday. How will their beloved measure up in the cold light of day, once she's arrived on the train from Brighton, to a chorus of boos from those cramped, miserly creatures in the critic's box? You'd think these so-called experts would know better than to watch the movies, still less to have opinions about them. What do they think this is? Some kind of objective arbitration of which movie is bestest? An actual adjudication of aesthetic merit? But how adorable! Most people have long ago accepted that the purpose of the Oscars is to be as annoying as possible so everyone can howl at the television and go to bed with comforting thoughts about the iniquity of life, the universe and everything. My judgment on which films are going to win is absolutely infallible until I watch the blasted things. Once Ive made that elementary error, I can either root for the ones I would like to win or I can make accurate predictions as to which ones will win. There is simply no confusing the two categories and to do so is to invite a whole world of pain upon yourself. This year for instance I would like nothing better than to see Jeremy Renner win an Oscar for his performance in The Hurt Locker, and Carey Mulligan for An Education. On the other hand to see Sandra Bullock scoop it up for crud like The Blind Side, or Meryl Streep for her self-amused vamping in Julie and Julia, would cause a small moan of pain to escape my lips. I would also like Vera Farmiga and Stanley Tucci to come away clutching statuettes and Nick Hornby to get a well-deserved Oscar for best adapted screenplay. If I thought it was the duty of the Oscars to get these things right. But I don't. It is not. I think it their solemn duty to get these things as wrong as they can so the rest of us can howl at the television and retreat to our beds convinced of the iniquity of life, the universe and everything. Remember how weird it felt when Francis McDormand won for Fargo? Too many correct calls like that and the reputation of the Oscars would be wrecked in perpetuity.