The clash of symbols 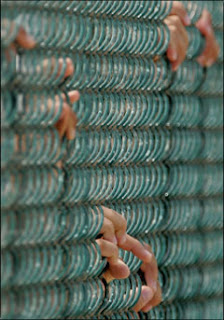 'Liberal human rights groups belittled the announcement about the Illinois prison because it did not resolve those issues. Amnesty International called it nothing more than “changing the ZIP code of Guantánamo.” We disagree strongly... it is impossible to credibly repair this nation’s justice system while it operates a shameful symbol of illegality and inhumanity' — New York Times

Leave symbolism to the poets. We are not closing Guantanamo because it is merely a symbol of illegality and inhumanity. Of more pressing concern is the fact of its illegality and inhumanity. When Thatcher freed the Guildford Four, it was not because they were a symbol of England's injustice towards the Irish. It was because they were an instance of England's injustice towards the Irish. If I kick you in the shins, I can certainly try and argue that it was just a symbolic blow, but you would be foolish to listen. Symbolism has no place in this argument, because it leaves open the possibility that Guantanamo was really a smashing system of justice that just got a bad rap. It's a bit like one of those non-apology apologies that goes, "well I'm sorry if you were offended by what I said...."