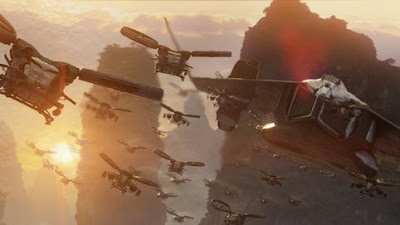 "If you make a comment about the Iraq war and American imperialism in the Middle East, you’re going to get a lot of people pissed off at you in this country, but you do it in a science-fiction context, where you do it at a metaphorical level, people get swept in by the story and they get to the end of the movie before they realize they’ve been rooting for the Iraqis" — Vanity Fair

Remember that Aliens, not Rambo, was Cameron's Vietnam movie — the marines have their asses hand back to them on a plate — also that he accurately predicted the kind of kind of enemy America would one day face in the form of the t-1000 terminator — shape-shifting, cellular, mercury to Schwarzeneger's might — and you realise that Cameron is the finest director of combat in the asymmetrical era. How fascinating that in the best director race he is going to be up against his ex, Katheryn Bigelow, and that of the two of them it would be Bigelow who dealt with Iraq head on.